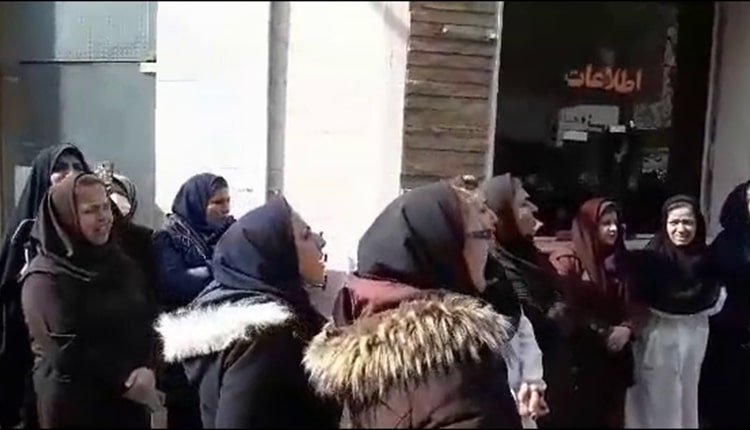 A large group of swindled clients of Sekkey-e Samen Institute gathered across from the Central Bank in Tehran on Sunday, February 17, 2019, and held a major protest gathering and demonstration. The protesters included a large number of Iranian women. They damaged the main door of the Central Bank, chanting, “Iran is an exemplary thieves’ house in the world.”

Also on Sunday, February 17, 2019, nurses working at the hospital of Karaj held a gathering in protest to the hospital’s failure to pay their salaries for a year. The protesters the majority of whom are Iranian women gathered at the hospital’s courtyard and chanted slogans.

A group of employees working at the office of the Edalat Stocks Co. converged from various provinces and cities in Tehran and held a protest outside the Ministry of Economy to follow up on their employment status. The protesters were around 1500 people including a large number of Iranian women. They have been working for the company for 12 years but do not have any definite employment status, and they have not received their salaries for 48 months. (The state-run ILNA news agency – February 17, 2019)

On Saturday, February 16, 2019, a group of people gathered across from the mullahs’ parliament to protest against the procedures of Lawyers’ Examination. They urged the Legal and Judiciary Committee of the Majlis to attend to their demands. (The state-run ISNA news agency, February 16, 2019)

On the same day in Tehran, a group of members of the Housing Coop of the Ministry of Agricultural Crusade gathered in protest outside the Ministry of Labor (the official IRNA news agency – February 16, 2019), a group of plundered investors of Ramesh Car Company gathered outside the General Prosecutor’s Office in Tehran, and the clients registered to purchase cars from the Bahman Motor Company held a protest outside one of the company’s branches. In Alborz Province, a group of teachers who have not received their salaries for the 2018-2019 academic year held a protest on Saturday, February 16, 2019.

Also on Saturday, the residents of Kooy-e Mahdis in Ahvaz, held a protest against water cut-off and low pressure of pumped water.

Iranian women played an active role in all the above protests and demonstrations.