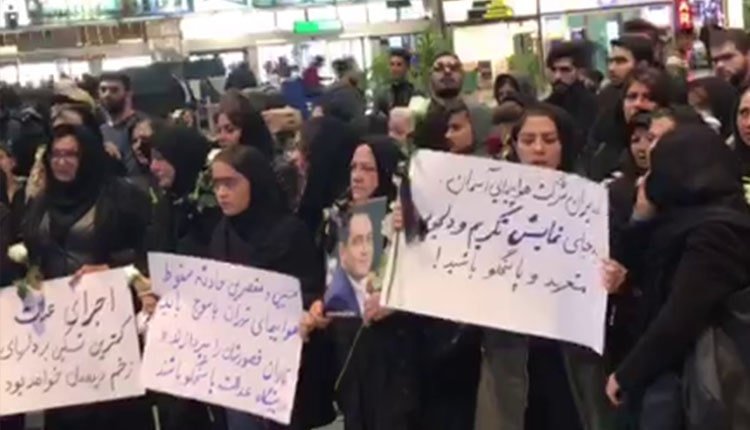 A group of bereaved families gathered in protest on Monday, February 18, 2019, in terminal 4 of Tehran’s Mehrabad Airport. The protesters have lost their beloveds on this day last year, when their plane enroute Tehran to Yasuj crashed. They want the government and airport officials to account on the deaths of their loved ones.

On the same day, a group of plundered women, investors of the IRGC-backed Caspian financial institute, gathered in protests in Rasht. The plundered clients of Badr Toos (Caspian) also staged a protest in Mashhad in front of Khorasan Razavi’s governorate demanding their swindled funds.

The employees of Edalat Stocks Co. also held a protest on this day outside the Ministry of Economy for the second consecutive day. The protesters have wage arrears for 48 months and though they have worked for this company for 12 years, they have no job security. (The state-run ILNA news agency – February 18, 2019)

The state-run ISNA news agency reported on Monday, February 18, 2019 on a protest held across from the Majlis (the mullahs’ parliament) against the tests taken for proctorship.

In Karaj, the medical personnel and staff of Karaj Hospital gathered in protest for the second consecutive day for not receiving their wages. The vice president of labor council of the hospital explained, “The hospital has about 500 employees who have not received their salaries between 8 and 11 months. They have only received 4 months of it.” (The state-run ILNA news agency – February 18, 2019)

The retired employees of the state foundation, Bonyad-e Shahid, also staged a protest demanding their past due wages and bonuses. They gathered in protest in front of the foundations’ central building on Taleghani Street in Tehran. (The state-run ANA news agency – February 18, 2019)

The plundered customers of Shadi Goldshop also held protests at Tehranpars district in Tehran in front of the Supreme Court. This gold trade business with a history of 19 years, has defrauded more than 4,000 customers.