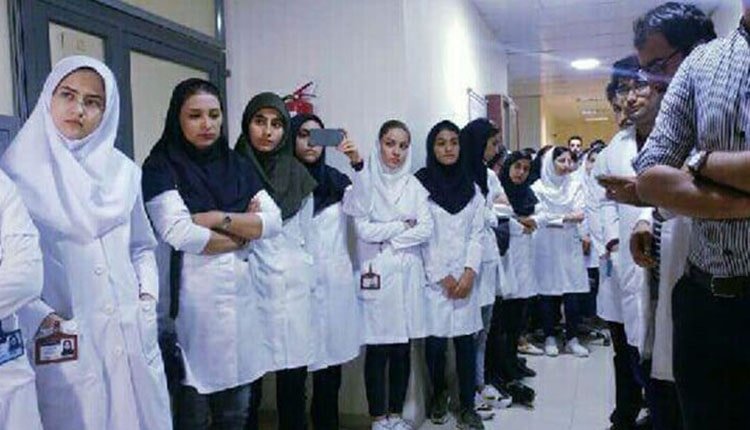 News of protests on Tuesday and Wednesday, February 19 and 20, 2019, indicate that women widely participated in these protests in cities across the country.

In Tehran, a group of customers of car companies – Changan and SAIPA – held a protest gathering outside the Ministry of Industries, Mines and Trade on Wednesday, February 20, 2019, in protest of increase in the prices of the cars they have already purchased.

Also on Wednesday, February 20, 2019, a group of workers and employees of the Communications Department of East Azerbaijan Province who have been hired by a contractor held a protest in Tabriz.

A group of the employees and medical staff of the Hospital of Karaj, continued their protest for the third consecutive day on Tuesday, February 19, 2019, demanding payment of their arrears. Women widely participated in these protests which have continued for months.

Plundered clients of the Caspian Institute in Tehran held a protest on Tuesday, February 19, 2019, outside Tehran’s Prosecutor’s Office. They continued their protest by marching on to the Penal Court.

Simultaneously, Caspian’s defrauded investors in Kermanshah held a protest outside the company’s branch in this city.

On Tuesday, February 19, 2019, students of dentistry at the Medical Sciences University of Hormozgan held a gathering in Bandar Abbas in protest of lack of medical facilities in Shariati Hospital. Women widely participated in this protest gathering.

On the night of Tuesday, February 19, 2019, female students residing in Tehran University’s Fatemeh Dormitory protested the bad quality of food in the dormitory’s cafeteria and lined up their food trays in the courtyard. Also women widely participated in the protest of a group of Health Technology graduates at the Medical Sciences University of Torbat-e Heydarieh against government’s failure to employ them.

On Monday, February 18, 2019, a group of environmentalists held a protest on the dry river bed of Zayanderood demanding permanent flow of water in this river and protesting blocking of water flow in this river.