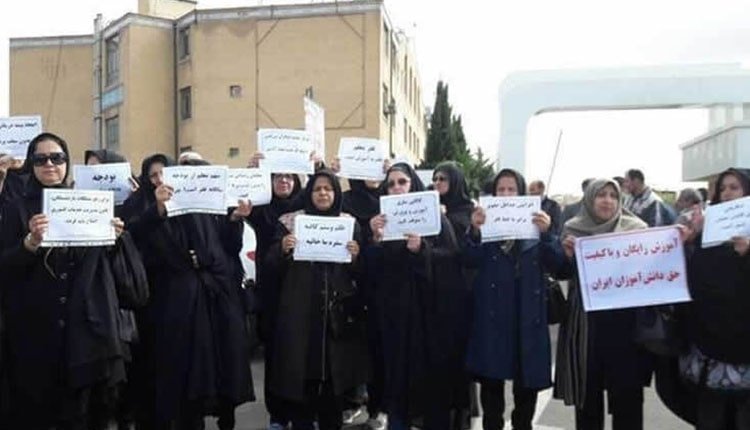 The protest gathering of the plundered clients of Sekkey-e Samen financial company in Tehran led to skirmishes and a number of protesters were brutalized by the police and got arrested.

The plundered clients of Sekkey-e Samen gathered outside the Central Bank in Tehran on Saturday, February 23, 2019, to protest swindling of their assets by this company. Police and security forces reacted to this gathering. One of the women protesters kept crying out, “We just want our money. The plundered clients of Sekkey-e Samen just want their money.”

In response to these cries, however, the protesters were beaten up and arrested.

The protests of the plundered clients of Sekkey-e Samen has been going on for months, but they have not yet received any answer to their demand.

Also on Saturday, the plundered investors of the fraudulent Caspian Institute held a gathering, in Ilam. Women’s participation in this gathering was remarkable.

Teachers working on temporary contracts in the city of Alborz in Qazvin Province, went on strike Saturday morning and did not teach their classes, demanding nine months of their unpaid arrears and overtime fees.

Two groups of graduate students also held gatherings on Saturday, February 23, 2019, outside the mullahs’ parliament and the Ministry of Roads and Urban Development in Tehran. (The official IRNA news agency – February 23, 2019)

The graduate students planning to take the proctorship examination have been protesting for four consecutive days.

Students of Agriculture and Natural Resources of Tehran University lined up their trays on the floor in protest to the poor quality of food served by the restaurant on campus.

Parvin Mohammadi’s mother proclaimed in this gathering, “The regime thinks its problems will end by arresting Parvin. But there have been many people like Parvin and there are going to be more of them. I have suffered even since this regime took power. I am concerned for every one and not only for my own daughter.”