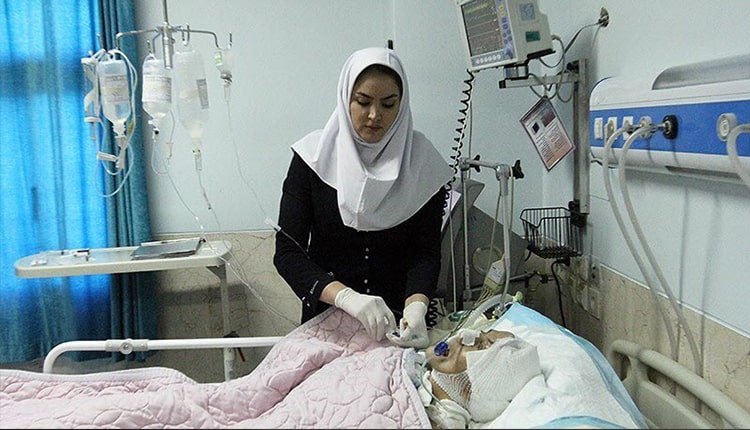 Female nurses in Iran are entangled in a web of damaging problems.

The quality of nursing services and the working conditions of nurses are categorized under social protection systems and access to public services, both significant themes taken up by the 63rd session of the UN Commission on the Status of Women (CSW).

Female nurses in Iran are stuck in an entangled web of social and economic problems created by 40 destructive years of the mullahs’ theocratic rule.

78.5% of Iranian nurses are women and they face a plethora of problems: shortage of work force, alternating shifts and particularly night shifts, difficulties in attending to their families like the lack of kindergartens in a number of medical centers especially during the night shifts, low salaries compared to the services they provide, difficulties for pregnant nurses, restrictions on retirement, skeletal-muscular illnesses, past due arrears, not implemented tariffs on nursing services, the miserable state of hospitals caused by privatization,… And the list goes on.

By September 22, 2017, the total number of nursing personnel employed by the medical sciences universities, including the personnel for operation rooms, anesthesia, and medical emergencies, amounted to 117,639 persons which included 92,442 female nurses. The average income of female nurses is presently around 2.4 million tomans (approx. $178) but many work for 500,000 tomans ($37) without having any insurance.

Asghar Dalvandi, the president of the National Nursing Organization, says discrimination and injustice against the nursing community in Iran has aggravated in the past five years. He acknowledges that the situation of nurses in Iran is worse than the situation in Kenya and Iraq. “We need at least another 150,000 nurses. The world standard of the ratio of nurses to hospital beds is 1 to 8 (12.5%), while in our country this ratio is 0.7% (less than one nurse for every 100 beds). This shows we are way below the standards.” (The state-run Mehr news agency – January 12, 2019)

On January 12, 2019, the state-run ILNA news agency reported, “The Secretary General of the Iranian House of Nurses, said last month that due to financial restrictions and the policy of not granting new licenses, there are 30,000 unemployed nurses in Iran. He added, “To provide adequate nursing services, we must have four nurses for (every 1000 persons in) the population. Of course, the world’s average is six nurses for every 1000 persons in the population. So, if we want to have the minimum number of nurses for the 80 million population (of Iran), we must have at least 240,000 nurses working across the country, whereas right now, there are only 160,000 nurses who provide medical and health services.”

Nurse shortages have led to an increase in the number of patient companies. It has also led to overtime work and mandatory work shifts for the existing nurses. This is a problem that the regime’s officials have essentially not paid attention to.

The latest example is the new fiscal year budget allocation for recruitment of new nurses which has been turned down. The responsibility of recruiting new nurses is constantly being passed from one government agency to the other. This while half of the nursing graduates remain without jobs. In some provinces, 2500 persons have graduated in recent years but only 450 of them have been recruited.

Abbas Eskandari, head of the Nursing Organization of Isfahan, has also complained of the shortage of nurses in this province. He said, “Shortage of nurses creates additional pressure at work, causing professional distress, increasing the possibility of nurses making mistakes, and consequently increasing the possibility of deaths in hospitals.” (The state-run ILNA news agency – January 12, 2019)

Female nurses in Iran are not only missing their monthly salaries but are enduring great pressure at work. Since in the end, they cannot respond to everyone’s needs, they become directly face to face with the patients and their companies, and are often insulted and even brutalized. Twenty-eight nurses were brutalized in 2017, and 20 nurses have lost their lives in the past three years.

Eleven years after the mullahs’ parliament, Majlis, announced in 2007 that they have passed an Act for Implementing Tariffs on Nursing Services and Balancing Nurses’ Commission Fees, there has been no news of its enforcement. This is one of the reasons for nurses’ low wages, forcing them to work consecutive shifts of a difficult job. In this way, those who provide more than 80 percent of medical services at a hospital do not receive their fees, when no tariffs are defined by government officials.

Such chaotic situation has caused increased immigration, growing discontent, and repeated protests by nurses without receiving any response from relevant authorities.

Mohammad Sharifi Moghaddam, the General Secretary of the House of Nurses says, “Iran is badly in need of nursing services. The government must invest in this field and recruit its graduates in both public and private sectors. When their salaries and commission as well as their working hours comply with international standards, our nurses will not have to leave the country for Germany, Australia, Canada, the U.S., and even the Persian Gulf countries.” (The state-run ILNA news agency – January 12, 2019)

Nurses’ salaries in the said countries used to be three times greater than their salaries in Iran even before the value of Rial plunging so much.