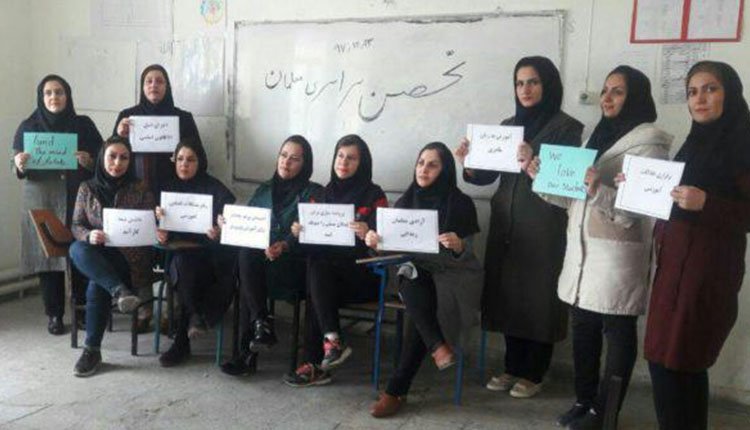 The third day of the nationwide strike and sit-ins of teachers in Iran continued on Tuesday, March 5, 2019, in more than 30 cities across the country.

Teachers also held up signs emphasizing their demands, including the release of imprisoned teachers. In some schools, in particular girls’ schools, students demonstrated their support for the nationwide strike of teachers.

Teachers and educators have refused to go to classrooms and have stayed in the school offices to protest the current status of their livelihood and living below the poverty line.

The Asharq Al-Awsat newspaper reported the news of the sit-in and nationwide strike of teachers and wrote, “Iranian teachers started their three-day strike in more than half of Iran’s provinces in protest to the government’s failure to respond to their demands while living in bad livelihoods.”

Meanwhile, on Tuesday, March 5, 2019, the state-run Fararu website, quoted the Minister of Education on the subject of the sit-ins and strikes and wrote, “In the short term, we can not solve the livelihood concerns. Some of my fellow colleagues are protesting and complaining about the situation. This method of protest, even in only one school in the country, is an anti-educational measure. The method of protest leaves a bad example for students for a teacher to sit in a school office and not attend the classroom, and in practice, we are actually behaving against justice.” (The state-run Fararu website – March 5, 2019)

Also in another event, employees of Edalat Stocks Co. held a protest in front of the privatization building in Tehran for the third consecutive day on Tuesday, March 5, 2019.

A group of retirees held a protest rally in front of the Guardian Council building in Tehran on Tuesday, March 5, 2019.

On the same day, a group of defrauded clients of the Shady Gold Company gathered in front of the Judiciary building in Tehran and protested against the company’s failure to meet their demands.