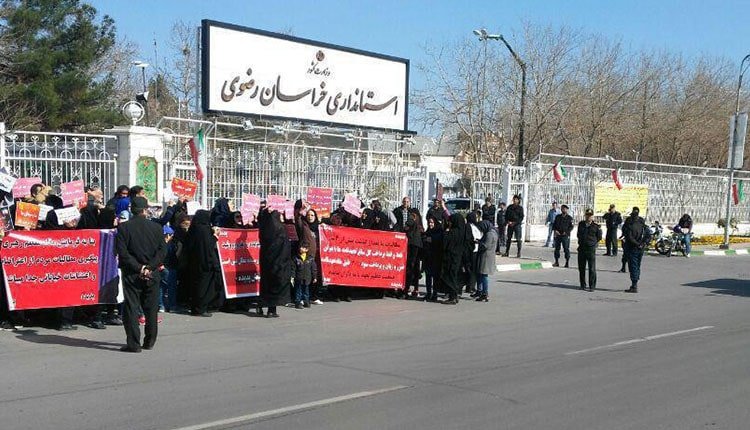 Iranian teachers and educators in six cities continued their protests after their three-day nationwide strikes and sit-in on Thursday, March 7, 2019.

Iranian teachers and educators held their protests outside the Department of Education in the cities of Kermanshah, Mashhad, Isfahan, Urmia and Qazvin, demanding an answer for their righteous demands. Women actively participated in these protests and played an effective role. The medical personnel of Khomeini Hospital in Karaj, including large numbers of women, also held another round of protests on Wednesday, March 6, and Thursday, March 7, 2019, outside the Alborz Governor’s Office, demanding their unpaid salaries and wages.

In another act of protest, the defrauded clients of the fraudulent Padideh Shandiz Institute gathered outside the Governor’s Office of Khorasan Razavi in Mashhad.

Hundreds of retired government employees marched toward the Governor’s Office in Isfahan on Wednesday, March 6, 2019. They are demanding raise in their pensions. The retirees marched as security forces and anti-riot vans had surrounded them.

Another protester said, “We expect that the officials who attend today’s meeting would pay special attention to the employment status and salaries of the employees of Saham-e Eadalat company.”

Women participated in 1499 protests over the past year spanning from March 2018 to the end of February 2019. This shows a threefold increase in women’s participation protests compared to the previous year. Female teachers and retirees participated in at least 581 protests and strikes in the same period.