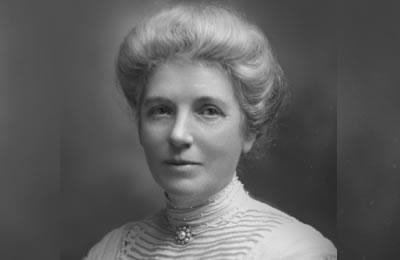 Katherine Wilson “Kate” Sheppard (March 10, 1847 –July 13, 1934) was the most prominent member of New Zealand’s Women’s Suffrage and was the country’s most famous suffragette.

Since New Zealand was the first country to introduce universal suffrage in 1893, Sheppard’s work has had a considerable impact on women’s suffrage movements in several other countries.

Kate Sheppard was born in Liverpool, England. She received a good education, and was noted for her intellectual ability and broad knowledge.

Discovering that much of the support for moderation came from women, the Temperance Union increasingly became active in advocating the cause of women’s suffrage, an area in which Sheppard quickly became prominent. Her interest in women’s suffrage, however, went beyond practical considerations regarding temperance: her views were made well known with her statement that “all that separates, whether of race, class, creed, or sex, is inhuman, and must be overcome.” Sheppard proved to be a powerful speaker and a skilled organizer, and quickly built support for her cause.

Sheppard is considered to be an important figure in New Zealand’s history.