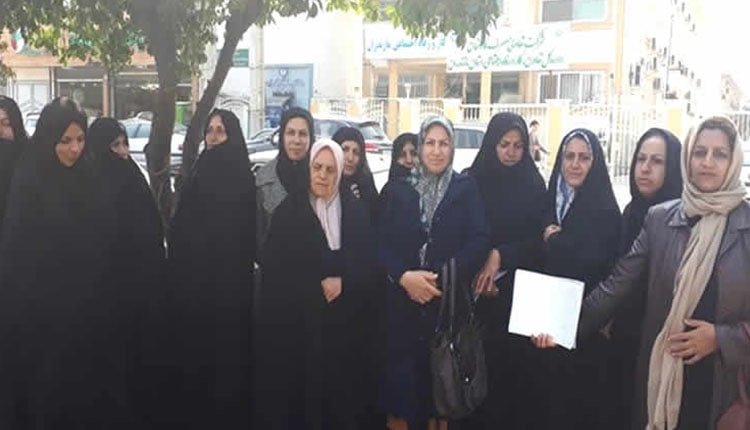 On Saturday, March 9, 2019, a group of medical personnel of Parsian Hospital in Tehran held a protest demanding their unpaid salaries. Women participated in this protest, actively.

Defrauded investors of Samen-ol Hojaj financial institute held a protest, also on Saturday, March 9, 2019, outside the Central Bank in Tehran. Women participated actively in this protest, too.

On the same day, a group of employees of Saham-e Edalat Company held a protest outside the Welfare Organization in protest of the undetermined status of their employment and their unpaid salaries. Some 1500 of the employees of this company have not received their wages and salaries. They also complain of the company’s offensive treatment of a number of disabled employees of the company. (The state-run ILNA news agency – March 9, 2019) The employees of Saham-e Edalat company held four days of protest last week where women participated in all of them.

On Wednesday, March 6, 2019, a group of female workers of Dasht-e Naz Company, located east of Sari, capital of Mazandaran Province in northern Iran, held a protest against the undetermined status of their employment and the company’s failure to pay their salaries. These workers include a number of heads of household who will suffer badly if they are laid off.

One of these workers said, “I have been working in Dasht-e Naz for four years. I run my own household and I have two daughters. If I lose my job in Dasht-e Naz I don’t know how to pay for my own and my daughters’ expenses.”

Another female worker said, “I have been working in Dasht-e Naz since 2015. Last year, I worked 93 days, but they paid me only for 23 days. During this time, I broke my leg and my eyesight was weakened.”