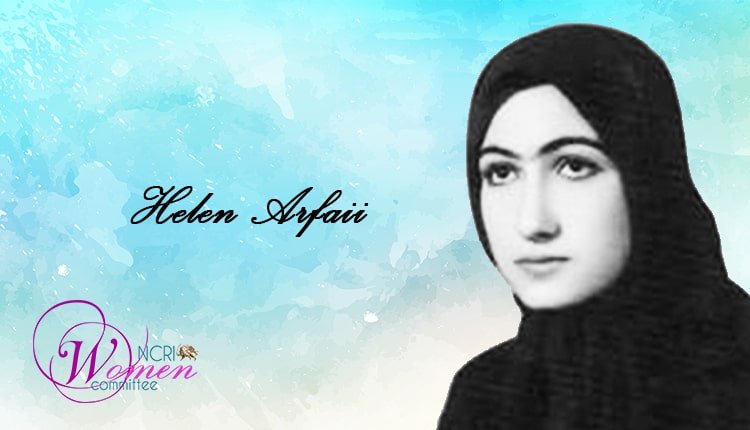 Helen Arfaii was born on September 23, 1958, to a low income family in Tehran. In 1975 she entered a higher education training for health and welfare of children and upon completion of the two-year program she started working with children in the second and fifth districts in Tehran.

Helen loved working with children and she poured all her love and passion into her work. On a regular basis, she would take care of sick children who had no access to medical care and would personally take them to visit a doctor and wait for them while they were being treated. Taking care and loving children was part of her short but productive life.

During 1978 and 79, Helen Arfaii participated in demonstrations against the Shah’s dictatorship and had an active role in helping and treating the wounded. She was a volunteer medic who would personally purchase everything she needed to help those injured.

After the Shah’s overthrow, being a supporter of the Mojahedin and loving to work with the poor and needy she started working with “Khazaneh Association,” a center for Mojahedin supporters in southern Tehran where she did her best to inform the people about the reactionary policies of the ruling clerics.

On April 27, 1981, Helen Arfaii took part in the 150,000-strong demonstration staged by the Association of Mothers supporting the Mojahedin (PMOI/MEK), condemning the murder of two teenage girls at the hands of Hezbollah thugs. She was arrested and transferred to Eshratabad Prison where after a week of torture she managed to prove her innocence and get released.

Following the peaceful demonstration on June 20, 1981 and the mass arrests of the Mojahedin supporters many of whom were her friends, she stepped up her activities and was subsequently arrested for the second time on October 23, 1981.

This time around, the situation was much direr as the regime was executing hundreds of young people every day and this had turned the prison scene into a battle field.

As soon as Helen Arfaii was arrested and before she was moved to the main prison compound, she was subjected to the most severe tortures for three consecutive days trying to extract all the information and the names of her friends and colleagues from her.

Needless to say that Helen Arfaii never gave them any information and despite the severe tortures, she kept giving them fake names and addresses so that her friends would have ample time to relocate. When her torturers realized the deception, they moved Helen from the Central Committee’s detention center where she was being held, to the Evin Prison where she was received in person by Lajevardi, the notorious butcher of Evin.

Eventually on December 21, 1981, when the interrogators and torturers realized that they cannot break her, they ruthlessly drained all her blood[1] and then sent her to the firing squad.

The next day, the family and friends of Helen Arfaii learned of her execution when her name and those of 19 other PMOI political prisoners were announced from the state television and published in the first page of Etela’at daily newspaper.

The 20 PMOI prisoners were secretly buried at Behesht-e Zahra cemetery in Tehran.

In the registry of Behesht-e Zahra cemetery, where there are hundreds of pages dedicated to those executed, it is written: Helen Arfaii, Section 92, tier 62, number 19

Helen Arfaii lived a short but prolific life, like a shining star piercing the darkness night. She set an example for a generation of young Iranians seeking freedom and a better future for their people and homeland.

[1] Khomeini, the founder of the clerical regime in Iran, had issued a fatwa according to which the blood of all death-row political prisoners had to be drained before execution, so that it could be used at the fronts for the revolutionary guards wounded and injured in the Iran-Iraq war.