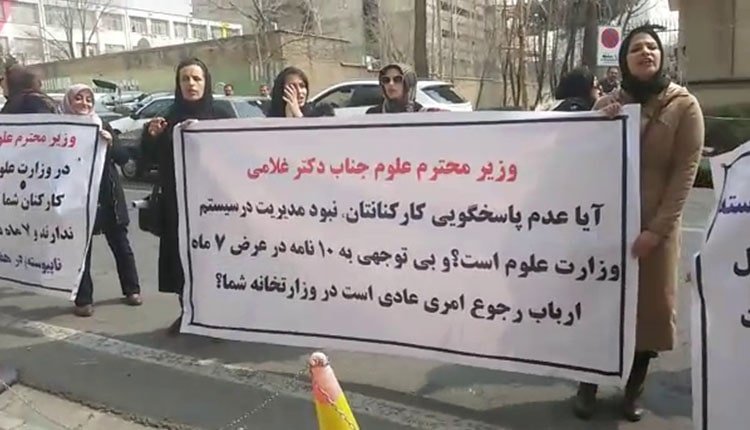 Nurses protest in Kashan and Babol demanding their rights

In recent days, various strata of society, including nurses, defrauded investors, municipality employees, and university graduates held protests against the misconduct and mismanagement of the ruling clerical regime of Iran. A large number of women participated in the protests.

On the same day, nurses from the Babol University of Medical Sciences protested in front of the office of the head of the university against the failure to pay their salary.

On Wednesday, March 13, 2019, the defrauded clients of the Padideh Shandiz Institute in Mashhad. The protest rally which was held in front of the prosecutor’s office in Mashhad was attacked by law enforcement forces.

On the same day, a number of exhibitors at the women’s empowerment exhibition in Mashhad protested against the high cost of exhibiting booths and low advertising. The exhibition was disadvantageous to the participants due to the mismanagement of government bodies.

On Wednesday, March 13, 2019, a group of employees of the Sarableh Municipality in Ilam province gathered in front of the municipality to protest against the nonpayment of their salaries and benefits.

On Tuesday, March 12, 2019, a group of defrauded clients of Sekkey-e Samen financial company, Caspian Credit Institute, and Alborz Iranian financial company gathered in front of the Judiciary building in Tehran to protest against the looting of their deposited money and assets.

On Monday, March 11, 2019, a group of employed experts in Clinical Laboratory Sciences in Tehran held a protest gathering against the policies of the Ministry of Health and in order to demonstrate their protest, ripped their academic qualifications, which was stamped by the Ministry of Health.

The protest of engineers held in front of the Ministry of Science and Technology Research building also continued for the 14th day on Monday, March 11, 2019.