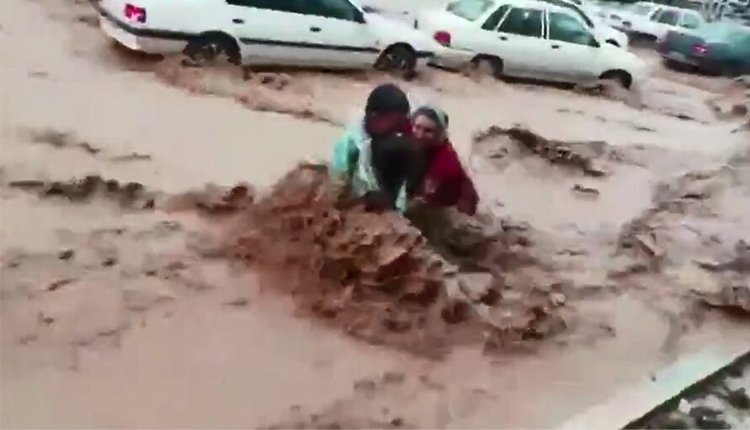 At least 11 women have been killed in the devastating flash floods in Iran and hundreds have been injured in 25 flooded provinces.

On Monday, March 25, 2019, disastrous flash floods swept across 25 provinces in Iran increasing the number of victims. 22 national axes have been blocked by the flood. There is no detailed information on the exact numbers of victims. The clerical regime has tried to announce lower statistics of victims.

Mrs. Maryam Rajavi, President-elect of the Iranian Resistance, presented her sincerest solidarity and condolences to the relatives of victims of the flood catastrophe and the Iranian people especially the population of Shiraz, wishing prompt recovery for those injured in the event.

She called the gallant youth of the country to come to the aid of those affected in Fars, Lorestan, Khouzestan, Sistan and Balouchestan, Isfahan, Boushehr, Ilam, Ghom, Kermanshah, Golestan and other parts of the country, adding that while Khamenei, Rohani and other criminal mullahs and authorities think only of keeping in place the disgusting religious dictatorship in power, bringing independent popular aid to the affected is a nationalistic and patriotic duty.

Reports related to the flash floods indicate that at least eight women and three children in Shiraz, a woman in Lorestan and two women in Mazandaran Province have died. The situation in Shiraz is dire. The public prosecutor in Shiraz confessed to the flood disaster in the province and said that the deaths and injuries of a number of residents in the flood in Shiraz were due to the negligence of authorities. In such a catastrophic situation, the Mayor of Shiraz is not present in the city. The mullahs’ regime has sent its intelligence minister to Shiraz in fear of the public’s anger and protest. In the wake of heavy rain in the Lorestan province, flash floods swept across the streets of Khorramabad, flooding parts of southern Lorestan.

The managing director of the Red Crescent Society in Lorestan Province called the situation in Khorramabad critical. The flood has caused a lot of damage in the cities of Pol-e Dokhtar, Kuhdasht and Selseleh. Previously, floods have caused damages in provinces of Golestan and Mazandaran, North Khorasan Province and Semnan. According to Ali Abbasi, director of forensic medicine in Mazandaran Province, “a woman and her husband died in the flood in Darab Kola district in Miandorud. Another couple also suffered from a power connection of one of the underground passages of Behshahr and the transmission of electricity to adjacent water, which led to their death.” (The state-run IRNA news agency – March 24, 2019)

The director of the agricultural department has said that two hundred and fifty thousand hectares of agricultural land have been damaged by the flood disaster. In Mazandaran province, six main bridges and 60 bridges have been destroyed and damaged.