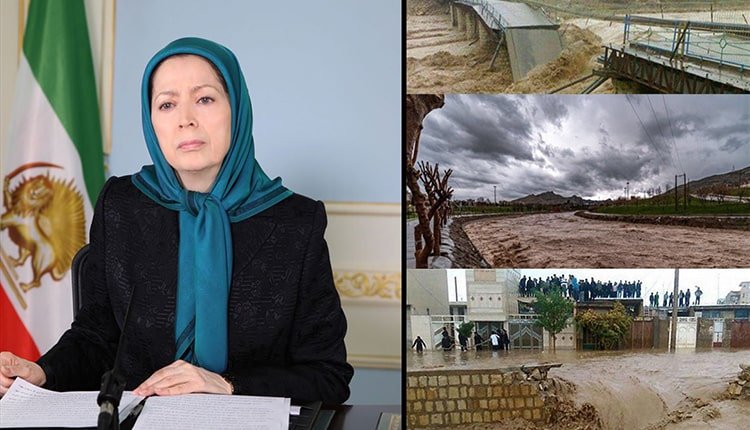 In the wake of the flooding of 30 Iranian provinces which has taken the lives of at least 200 people in Shiraz and other cities, the Iranian Resistance’s President-elect Maryam Rajavi sent a message to the people of Iran on Wednesday, March 27, 2019, calling on them to unite and cooperate in solidarity in order to prevail over the flooding and the evil rule of the mullahs.

In parts of her message addressed to the suffering people of Iran, Mrs. Maryam Rajavi said:

The corrupt mullahs have inflicted this catastrophe on Shiraz and its valiant people. They destroyed the channel which used to lead flood waters out. In the dry seasonal river bed beside Darvazeh Quran, they built urban facilities to gain huge profits for themselves and their accomplice.
In Golestan Province, it has been several years that they have failed to dredge the Gorgan River. They have destroyed vast parts of the forests and pastures, and they have evaded to drain the farms and manage the watershed.

In other cities, they have constructed buildings in the periphery of rivers or have blocked the natural paths of rivers. In implementing such a corrupt policy, they have taken over, damaged or sold river banks, sea shores, foothills of mountains, and jungles which are public properties….
Amid the disastrous flooding and such vast devastation, there is not much presence of aid workers and relief agencies. Instead, the mullahs have dispatched the Revolutionary Guard Corps and the Bassij paramilitary force to quell the outbreak of protests.

Shiraz needs emergency aid for the injured and assistance to clear the ruins and rubble, but Rouhani hastily sends there his Minister of Intelligence and his mafia of executions, suppression and terror….
I hereby call on all my fellow countrymen and women to cooperate together in the flood-hit areas and in other areas which are in danger.

The only way and the best way is that we help one another. No one and no other power is more effective and more accessible than the power of solidarity among us.
I urge everyone, particularly the young men and women, to form their popular councils in every neighborhood, and in every city, town and village to confront the floods and their disastrous consequences….

Rush to the aid of families affected by floods and show them your love and compassion. The mullahs have inflicted such a calamity on our people and cities. Let us build amid such disaster, our own solidarity and kindness which is the greatest strength of our nation.

Let us build with our tears and sorrow a force of sympathy and unity against the mullahs. In these difficult days, rely on one another and let people rely on you. Take one another’s hand and let us come together to advance our plans for a free and prosperous Iran.