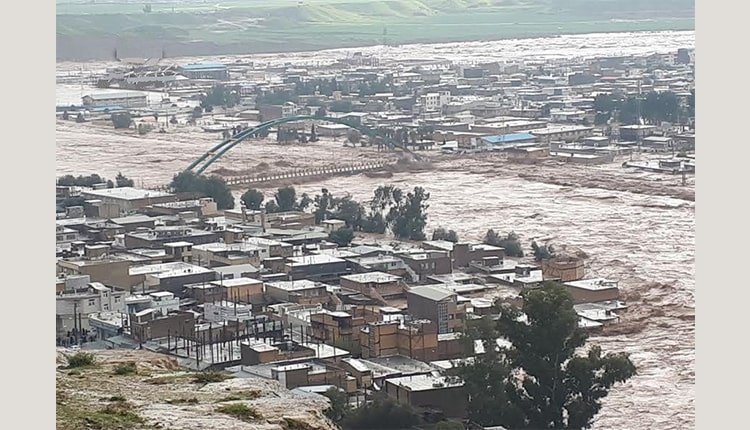 With continued heavy rain in the western and southwestern provinces of Iran, the flood disaster, which first swept across at least 25 provinces less than two weeks ago, spread to further areas on Monday, April 1, 2019, taking more regions underwater.

The flood hit the streets of Tehran. 141 rivers have flooded across Iran and the dams in Khuzestan and Ilam have overflown. Pol-e Dokhtar, located in the western province of Lorestan with more than 100 villages, has gone completely underwater. With the rage of the Kashkan River, 5,000 residential units have been flooded underwater and the people surrounded by the flood have no communicational ways to get out of this situation. (The state-run Rokna news agency – April 1, 2019)

According to an internal police report, at least 90 people were killed when floods engulfed the western city of Pol-e Dokhtar in Lorestan province. People are abandoned on the rooftops of their homes and do not have access to anything including water, food, clothing, and heating. The governor of Pol-e Dokhtar estimated that the damages to the city are at 500 billion tomans. Meanwhile, the head of the Iranian Red Crescent Society’s Relief and Rescue Organization has said that any relief effort for these affected families in Pol-e Dokhtar is a high risk. A member of the regime’s parliament from Aligudarz said provincial authorities are giving wrong figures, and the city has not received any aid. The governor of Lorestan also said, “If the rainfall continues, a large area of the city of Dorud will go underwater.” (The state-run Rokna news agency – April 2, 2019)

The regime, with its Islamic Revolutionary Guard Corps and the army, does not provide any help to the people who are affected by the flood disaster, and people say that there are no signs of even one official on the scene.

In a video released on social media, a displaced woman in Shush says, “Government agencies have not given us any help. We don’t even have water and food to eat. The traitorous officials in Ahvaz say you are considered to be in the Shush region and in Shush they say you are part of Ahvaz!”

At present, the only source of relief and aid for the flood victims is the solidarity and assistance from the residents of neighboring provinces and cities. Women play an active role in these activities.

In the photo below, women in Kordkuy, Golestan Province, are seen working on struggling to tackle the flood disaster by building flood barriers. In another image, women in Turkmen Sahra are busy baking food to send to the flood victims in the Golestan province.