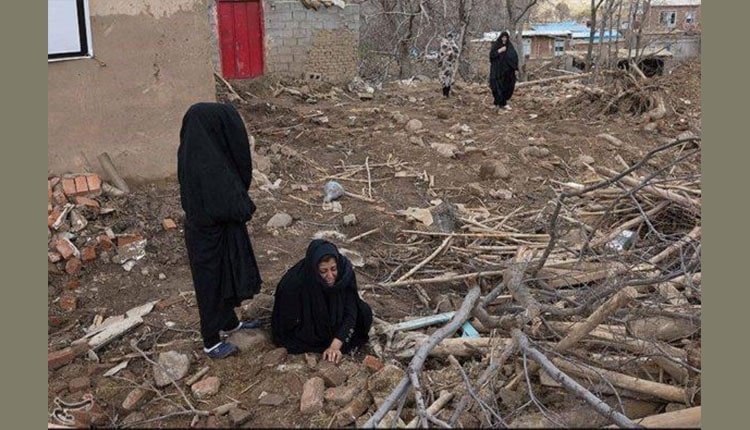 According to popular reports, on Thursday, April 4, the bodies of two women were pulled out of mud and sludge in South Enghelab St. in Pol-e-Dokhtar city (Lorestan Province).

So far there had been no official announcement of the death toll or missing residents of Lorestan Province. There is no act of surveying after the floods and the number of the families who have drowned in the flood after their houses have been wrecked by it, is not known.

In Mamolan County, 50 km of Pol-e-Dokhtar , regime’s elements have humiliated and disgraced the locals by throwing dry bread, blankets and some foods of helicopters at them. Electricity, water and gas are cut. Many of the main and secondary bridges are destroyed and there is no route to reach many flood stricken villages of Pol-Dokhtar, Delfan, Aligoudarz and Dowreh Chegeni.

In Khuzestan Province too, the flood stricken people are in dire conditions. All dykes at 13 villages of Bumdezh County, subdivision of Ahwaz, are gone and the water has reach the roofs in some villages.

Locals are receiving no aid from the government and live in a train. They have lost all their livestock and farms, and their fish breeding pools are sunk. (The state-run ISNA news agency- April 4, 2019) Women and men from Albonis Village in Bumdezh, walked 3 kms in deep water, up to their chest, before reaching a safe place. This village has been engulfed in flood for four days and the locals are left without any drinking water of food.

No aid coming from the government, people are launching popular aids towards the flood stricken areas.