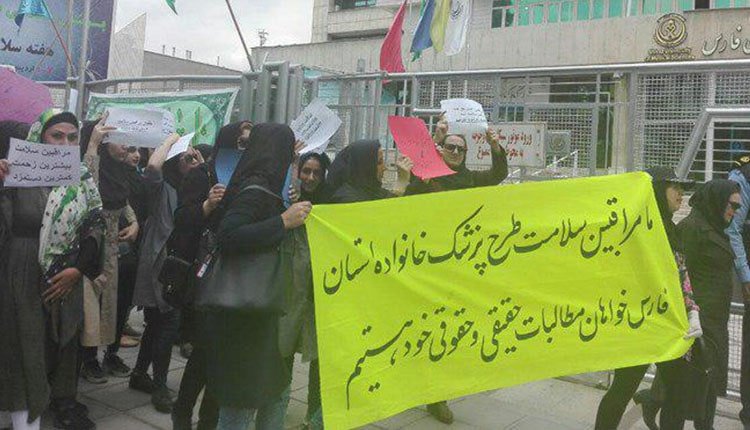 Defrauded investors of the IRGC-backed Caspian financial institute gathered in protest in front of the Office of the General and Revolutionary Prosecutor of Tehran on Tuesday, April 23, 2019.

On Monday, April 22, 2019, the plundered investors of Caspian and Badr-Toos financial institutes in Mashhad staged a protest gathering with high participation of women. They chanted, “So long as we don’t get our money, you will see our protests every day.”

Teachers held protest gatherings in the capital, Tehran, and Yazd in central Iran.

On Monday, April 22, 2019, a group of teachers gathered in protest in front of the Education Ministry to receive their wages. Teachers from all over the country participated in this protest with high participation of women.

On the same day, a group of teachers, mostly women, gathered outside the Department of Education in the city of Yazd. They called for resignation of some government officials including the Minister of Education.

A large number of female caretakers working with the Family Physician Plan in Fars Province held a protest gathering on Monday, April 22, 2019. The protesters held their protest outside the central building of the Medical Sciences University of Shiraz. Their demands included job security, payment of their insurance premiums and minimum wage as designated by the Labor Department. They also protested the fact that they had not been paid their dues as mentioned in Family Physician Plan. Also on Monday, April 22, 2019, a group of customers who had registered to buy cars staged a protest outside the Ministry of Industries, Mines and Trade in Tehran. They protested the high prices announced, failure to deliver their purchased vehicles and failure to meet their demands. High participation of women was noticeable in this protest.

On April 22, 2019, in Gachsaran, a group of shop renters of Oil and Gas Exploitation Company held a protest gathering outside the governorate’s office. They protested against the order to vacate their shops.

IRGC in charge of suppression of Iranian women