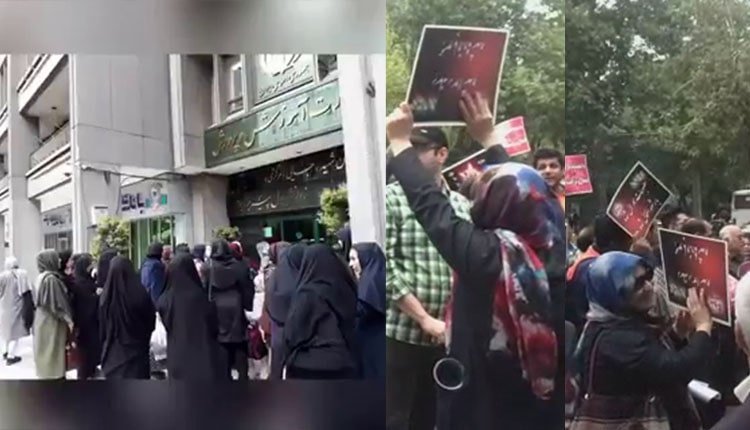 Tehran and Ahvaz saw dozens of protests from April 27 to 29, 2019, by students, teachers and defrauded investors, demanding their rights. Women actively participated in all of those protests.

On the second day of their protests on April 29, 2019, students of the Department of Mechanical Engineering of Khajeh Nassir Toosi University in Tehran, students denounced the university’s policy of receiving tuitions from students and protested against other problems they face. The students chanted, “Shame on irresponsible officials.”

Other student protests included calls by students of the universities of Tehran, Amir Kabir, and Allameh Tabatabaii, the Teachers Training College and Tehran’s School of Art for protest gatherings on May 1 and 2, 2019, in support of workers and teachers. They expressed their support for workers and teachers by chants of “workers, teachers, students, unite, unite,” and “we are the children of workers and we will stand with them.”

On Sunday, April 28, 2019, the defrauded investors of Padideh financial institute gathered in protest in front of the Prosecutor’s Office of Tehran to demand reimbursement of their plundered assets.

In protest to non-payment of their overdue wages, the employees of the Health Center of East and West Ahvaz held a protest gathering at the Medical Science University of Jundishapur. The security forces’ effort to confiscate one of the participants’ cell-phone met with strong protest by other participants.

On Saturday, April 27, 2019, wage-earning pre-school teachers from several provinces converged outside the Education Ministry in Tehran to hold a protest. The monthly wage of these teachers with about 10 years of work experience is only 150,000 Tomans (approx. $10) which is way below the minimum wage of a worker which is 1,100,000 Tomans (approx. $73). But this meager wage is not paid regularly. The protestors chanted, “the government betrays (us) and the parliament supports it.”

A group of retired employees of Sepah Bank protested the dire economic situation on Saturday, April, 27, 2019. They gathered in protest in front of Negin Building at Beyhaghi Boulevard in Tehran.