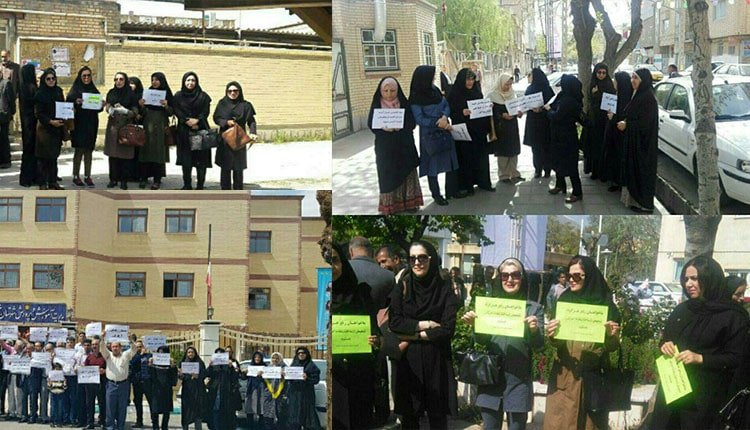 The Teachers Day in Iran on May 2 was marked by widespread protests and demonstrations by working and retired teachers and educators across Iran.

On this day, Iranian teachers held protests and demonstrations in a number of cities upon the call by “the Coordinating Council of Educators Guild.”

In Tehran, teachers and educators held a protest in front of the Education Department. Their gathering was attacked by security forces and a number of protesting teachers were arrested. The participants, however, continued their protest. Women teachers played an active role in this protest.

The protesting teachers chanted, “Our suffering is yours, people join us”, “neither the parliament, nor the government, think of the nation.”

Iranian teachers and educators protested against their dire living and job conditions and blasted the regime’s wrong policies on education on the Teachers Day.

Some of their placards read, “Imprisoned teachers must be freed”, “stop turning education to an enterprise”, “free, high quality, and fair education is the right of all children,” and demanded that the bank in charge of handling the salaries of educators be changed.

These protest gatherings are the first of their kind in the new Iranian year which began on March 21, 2019, which was extensively accompanied by the active role played by women.

Throughout the last year, women actively participated in at least 581 acts of protest by teachers and retirees. Teachers held five nationwide protests and sit-ins during the past year.