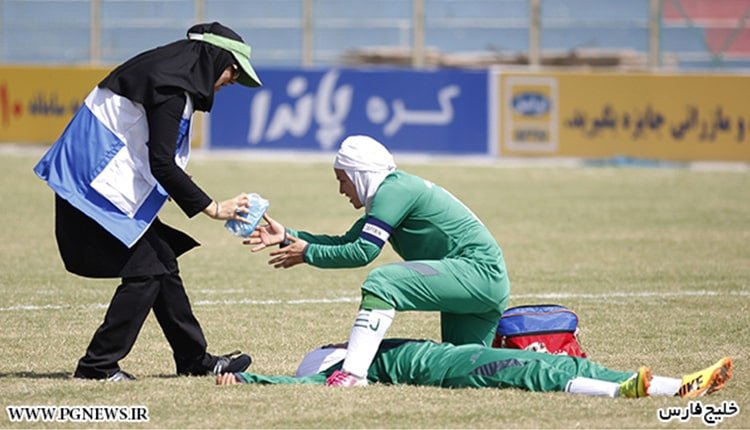 Several women footballers fainted out during one of the Women’s Football League games held in hot weather of Bushehr, capital of the southern province of Bushehr lying on the coast of the Persian Gulf.

The football match between Pars Jonoubi of Bushehr and Sepidar of Mazandaran was held on Sunday, May 5, 2019, at 10 a.m. in the hot weather of Bushehr. Several players of the Sepidar team of Mazandaran fainted out and lost consciousness.

The supervisor of the team from Mazandaran, Nargess Zinati, told the state-run ISNA news agency, “When we took the players to hospital, the hospital staff were stunned that they had played in that time of the day. They said, ‘who plays football in Bushehr at this hour? Even men do not play at this time.’”

Mismanagement of the games and lack of knowledge of the conditions of women footballers led to such decision making which totally ignored the health of women footballers. Before the start of the game we wrote letters to the League Organization, but they did not consider our request. The weather was so hot, that we had to give time out to the teams in the second half time.” (The state-run ISNA news agency – May 6, 2019)

Lack of planning and gaps in the games of Women’s Football League have worked against the interests of the national women’s team.

Marzieh Jaafari, head coach of the Municipality team of Bam from Kerman, said in this regard, “The gaps in the league games have worked against the national team because it adds to the expenses of the sponsors, and therefore they lose interest in supporting women’s sports. Which will in turn work against the interests of the national team, too. We really object to such planning.”

As for the accommodations in the sport fields for women footballers, Jaafari said, “The games are planned at 8.15 p.m. in the month of Ramadan. Such planning is against the teams on the top of the list, because the lighting of the stadiums is not good. Such issues are not considered in the planning of games.” (The state-run ISNA news agency – May 5, 2019)