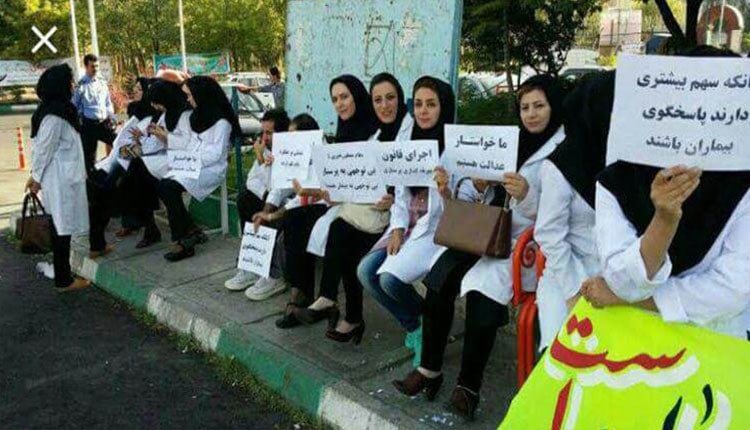 The families of those arrested on the International Labor Day, nurses of the Medical Sciences University of Mashhad, nurses of Karaj Hospital, plundered investors and others were among those who held protests in recent days. Women were highly active in all of these protests.

On Sunday, May 12, 2019, a group of families of those arrested on the International Labor Day, held another protest gathering outside Evin Prison, demanding the release of their loved ones. The protests by these families have been continuing for some 10 days.

On Saturday, May 11, 2019, nurses of the Hospital of Karaj held a gathering in protest to their undetermined status and the hospital’s failure to pay their salaries.

The nurses of the Medical Sciences University of Mashhad also held a protest on Thursday, May 9, 2019, outside the university’s administrative building, demanding their rights and job security. On their placards, the nurses had written, “We demand justice”, “Neglecting nurses is neglecting patients.”

On May 7, 2019, female students of Doroodzan held a second sit-in outside the office of the Minister of Education. Like the first time, this time too, security forces drove them out and their demand for receiving assistance to pay the high expenses of their treatment remained unanswered. These students burned in a fire 13 years ago in their elementary school in Doroodzan in Fars Province and suffered more than 50 per cent burns. (The state-run ROKNA news agency – May 8, 2019) In Shiraz, a number of flood-hit citizens including a number of women, held a symbolic protest march with mud-covered clothes and equipment to protest the regime’s failure to give support to flood victims and the officials’ lying about it.

The defrauded investors of the Caspian Institute in Mashhad also held a gathering outside the Prosecutor’s Office in this city on Monday, May 6, 2019, but security forces did not allow them to continue their protest.