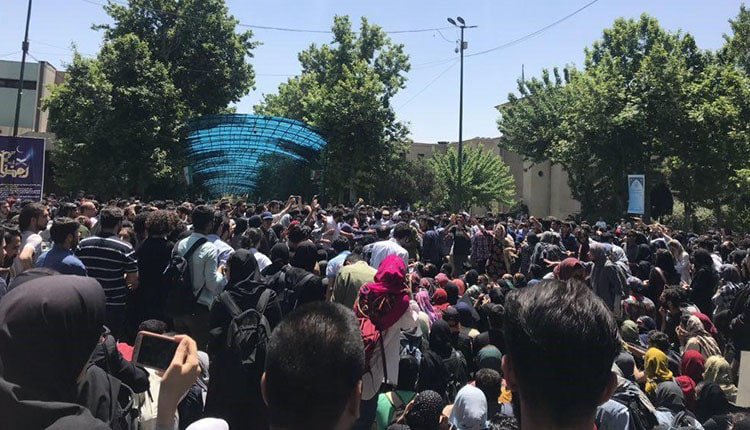 Hundreds of students of Tehran University held a major protest on Monday morning, May 13, 2019, against renewed efforts to enforce strict compulsory veiling rules on female students.

Students gathered on campus and chanted, “Students die, but will never succumb (to oppression).” Students carried placards which read, “Freedom of choice is our inalienable right.”

The students continued their protest by gathering in the auditorium of the School of Fine Arts, demanding the president and vice president to answer. In response, Bassij forces attacked the students and brutalized them.

Over the past week, Tehran University students witnessed female Bassij members stationed on their campus along with other security forces. The measure sought to harass female students over their clothes and head coverings and enforce the compulsory veil through cracking down on female students. Security forces were stationed all across the campus to enforce disciplinary rules and to terrorize the students, especially the female students.

In her ten-point plan on women’s rights in tomorrow’s free Iran, the Iranian Resistance’s President-elect Maryam Rajavi has announced, “Women are free to choose their own clothing. The law of forced veiling shall be repealed. Laws that prescribe administrative punishment for lack of veiling of female workers or employees shall be repealed. Written or unwritten laws on controlling the clothing or behavior of women under the rubric of “mal-veiling,” which have violated Iranian women’s right to freedom and security, shall have no place in tomorrow’s Iran.”

In another development, a group of teachers in Saqqez, held a gathering on Sunday, May 12, 2019, to declare support for the teachers arrested during the Teachers’ Day protests in Iran. Women teachers widely participated in this protest. They held placards which read, “Imprisoned teachers must be freed” and “teachers must not be in jail.”