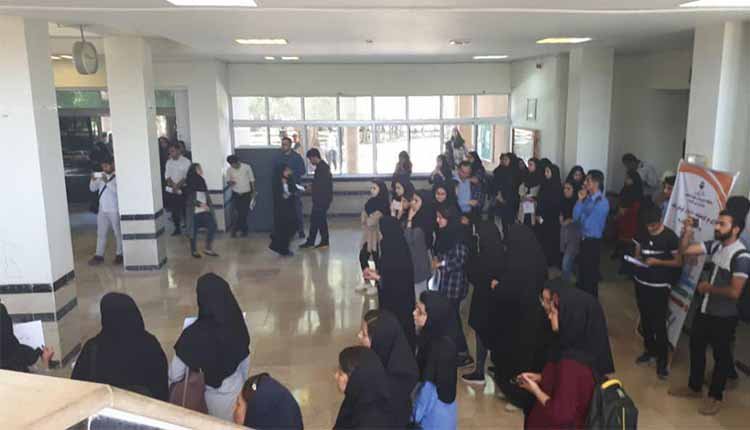 Simultaneous with the student protests at Tehran University, other students also held protest gatherings against compulsory veiling and the dismissal of their classmates in the universities of Bushehr and Sanandaj.

Massive student protests were held on the campus of Tehran University on the morning of May 13, 2019, in protest to the deployment of security forces and female Bassij agents on campus to control the female students’ attire and implement the Disciplinary Committee’s rules. Bassij forces attacked Tehran university students and beat them during the protests.

Despite the presence of security forces, the student protesters read out a statement against compulsory veiling. The statement read in part, “Imposing a special kind of dress code on university students is a clear violation of their privacy and their human rights, and is a sheer oppression of female students denounced by all student circles and associations… We demand an end to such measures by the university’s security forces…”

On the same day, student protests were held at Khalij-Fars University in Bushehr to protest the university’s plans for Chastity and Veil and the regulations enforced by the university’s Disciplinary Committee and the Guidance Patrol.

Students of the University of Kurdistan in Sanandaj, held student protests on Monday, May 13, 2019, against deprivation of student political activists from education, demanding their return to classes. The regime’s agents made threats to disperse the students to no avail.

Other protests of the day

A group of families of prisoners jailed at the Central Prison of Sanandaj held a protest to object the dire health and food conditions in that prison. The protest gathering was held in front of the city’s court. The prison’s special guards attacked the protesters and brutalized them.

A group of medalists from the 2018 Asian and Para Asian tournaments in Jakarta gathered in protest outside the Sports Ministry in Tehran on Monday, May 13, 2019, because they have not received their rewards for winning in the games. On Tuesday May 14, 2019, a group of defrauded investors of the Badr Toos Institute a subgroup of the IRGC-backed Caspian Financial institute, held a protest gathering outside the governorate’s building in Mashhad.