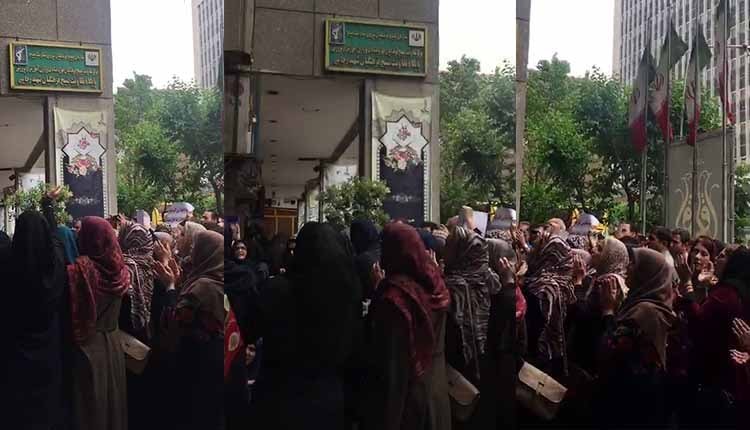 Retired teachers and defrauded investors of the Caspian financial institute in Tehran, and nurses in Karaj continued to hold protests to reach their demands. Women widely participated in the following protests.

On Tuesday, May 21, 2019, a large number of retired teachers and staff of the Education Ministry gathered outside the Ministry of Education to protest the ministry’s failure to meet their demands and pay them their dues.

On the same day, a group of defrauded investors of the IRGC-backed Caspian financial institute in Tehran gathered outside the President’s office in Tehran to protest the plunder of their properties and assets. The gathering was held outside the Horr Metro Station across from Rouhani’s office. The protesters accused the government of betraying them by plundering their deposits.

A group of nurses and workers of Karaj Hospital once again held a gathering on Tuesday, May 21, 2019, to protest non-payment of their salaries. They gathered outside the hospital and chanted against the governor and the mayor who do not care to respond to the needs of the hospital staff and nurses.

The hospital of Karaj has had numerous problems since last year and is almost shut down. The hospital’s debts amount to 120 billion tomans, the greater part of which accounts for the unpaid salaries of its staff and personnel. The hospital has the latest cardiology equipment. On Monday, May 20, 2019, a group of citizens with disabilities gathered in protest in the province of Yazd held a protest gathering outside the General Department of Welfare in this province. The protesters said none of their demands have been met and they do not receive any medical and rehabilitation services from the government. And none of the relevant officials in the government has attended to their inquiries.

At least 12 protests were held on Tuesday, May 21, 2019, in different Iranian cities, and women participated in the gatherings of the retired teachers, the investors defrauded by Caspian and hospital nurses in Tehran and Karaj.

Punishment for acid attacks ratified without restricting sale of acid