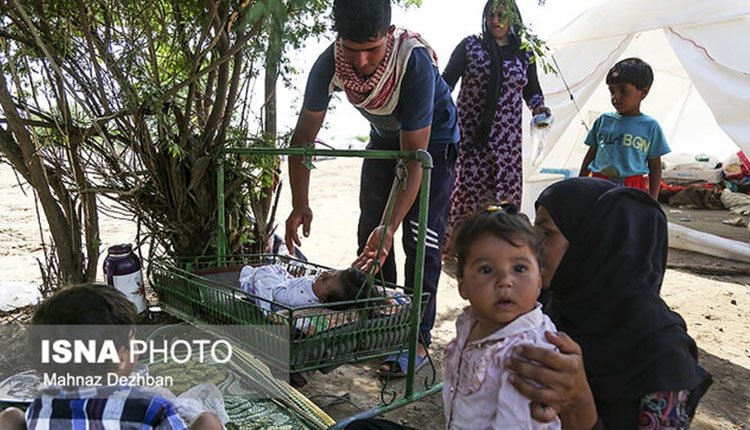 Two months after flash floods drowned most of the villages in Khuzestan Province, in southwestern Iran, most inhabitants of these villages are living in tents facing an uncertain future without any prospect to receive compensation for what they have lost. The situation of women and children is the worst. This was reported on May 23, 2019, by the official IRNA news agency excerpts of which follow.

The Hamdan Seljeh village is located on the road to Khazraj in Hamidieh. The village is still engulfed in water and its inhabitants are living in camping tents on the hills of Khazraj Forest and on hot sands in the month of Ramadan in the heat of 44 degrees. Forty-five families live in these tents.

Most inhabitants of this village used to have live stocks and earn their living by farming. Now, they have lost their meager assets and are living in the forest facing an uncertain future.

Government officials have promised to give them trailers without specifying any deadlines for doing so, just like what they did to the victims of earthquake in Kermanshah.

Every newcomer is surrounded by children asking them to see what they taken for them because these villagers are still waiting to receive help.

A 9-year-old girl says, “My school has been ruined. I have missed going to school. I have the report card for only the first term, and I was not able to take the tests for the second term.” Hot weather in the month of Ramadan has made things more difficult for these villagers.

The situation of pregnant women, the elderly and infants is deplorable. In the heat of 44 degrees, they do not even have a fan to cool the air inside the tents. An infant born on April 5, in the early days of the flash floods, is constantly crying in his mother’s arms. In addition to the hot weather, the dangers of insects, vermin and snakes has made life more difficult for these villagers.

A young mother notes the uncertain future she and her family face by saying, “This is our situation. We had just built our house only a few months before. Now, all of our belongings have been washed away by floods. The dirty blanket we are sitting on is what my husband found on the road. My heart bleeds when I see our house ruined and its walls crumbled.”

The young woman continues, “I wish we knew how long we’d have to stay in the forest. My newborn son is always crying and cannot tolerate this heat. At nights, I worry for him fearing that he may be stung by a snake or insects.”

Another woman also underlines their uncertain future and tells of the problems of women. “Volunteers bring us packages of macaroni and canned food so that they would not rot in the heat of weather. And this is what we cook. We get our gas capsules filled in the city and bring them here. All of our lands have been washed away by floods and we no longer have any houses. What can we do with such destroyed houses? God knows.” (The officials IRNA news agency – May 23, 2019)

The European Civil Protection Mechanism (EUCPM) says the flash flood has been the worst natural disaster happening in Iran in the past 15 years, affecting 2,000 cities and town in 31 provinces. ReliefWeb, the specialized digital service of United Nations Office for the Coordination of Humanitarian Affairs (OCHA) says two million people are in need of humanitarian aid and over half a million people have been displaced from their places of residence.

The European Commission and the United Nations’ reports are based on the data officially produced by the Iranian regime. This is while the Iranian regime does not have any systematic method for collecting data. More than evaluating the extent of human and material losses, and trying to compensate for the damages, the regime is seeking to cover up the truth.

Suppression and corruption signal demise of a tyrannical rule