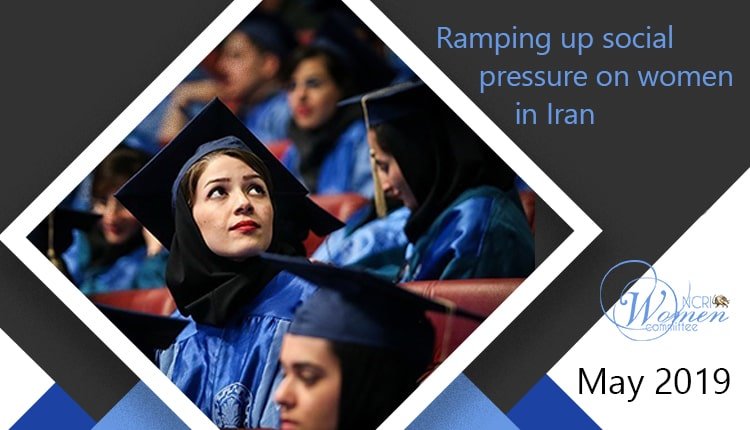 Ramping up social pressure on women in Iran

In addition to the continued arbitrary arrests of human rights and civil activists, the Iranian regime has also been ramping up pressure on Iranian women under various other pretexts since mid-April and throughout the month of May.

Our report this month focuses on the social aspects of the regime’s crackdown on women despite various international, economic and natural disaster crises which demand full attention, resources and energy from all state agencies.

May started off with widespread arrests of labor activists during the International Labor Day protests in Tehran, including at least 15 women activists. The month continued with the arrests and imprisonment of more female activists.

As political prisoner Atena Daemi wrote from prison in an open letter published on May 25, 2019, “The Islamic Republic regime is not feeling well… The recent apprehensions of civil and political activists advocating the rights of workers, teachers, women, students, writers, etc. are cause of concern. Of course, the only party that really needs to be concerned is the ruling regime! They are concerned and their actions reveal their weakness and disability, and that they do not find any other way to preserve their rule.”

Beset by numerous crises and unable to resolve the problems prevailing the country, the regime has been imposing more restrictions on women, tightening up the rules enforcing the compulsory veil and further cracking down on religious minorities.

Examples of the regime’s measures in this regard have been included in the NCRI Women’s Committee Monthly Report – May 2019.

In the beginning of May, Tehran University students witnessed female Bassij agents being stationed all across the campus along with other security forces to enforce the compulsory veil through harassing female students over their clothing and head coverings.

So, on May 13, 2019, hundreds of students of Tehran University held a major protest against such renewed efforts to enforce strict compulsory veiling rules on female students.