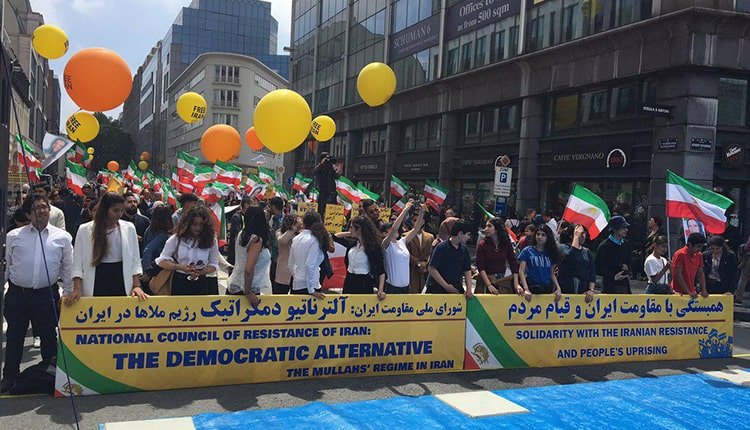 Thousands of Iranians, including hundreds of Iranian women, gathered for a large protest demonstration in Brussels on Saturday, June 15, 2019. The protesters condemned the brutal violation of human rights by the ruling regime and its instigation of terrorism and warmongering in the region. They expressed support for the Iranian Resistance movement led by Mrs. Maryam Rajavi, the President-elect of the Resistance. In her video message to the rally, the NCRI President-elect called on the European Union to place comprehensive sanctions on the religious dictatorship ruling Iran, and to proscribe the IRGC and the MOIS as terrorist entities. She also called for the prosecution of the Iranian regime leaders to account for their crimes against the Iranian people, especially the massacre of political prisoners, in an international court of law.

The great rally in Brussels featured prominent speakers including Françoise Schepmans, a Member of Parliament from Belgium; Ingrid Betancourt, former Colombian Senator and Presidential candidate; Sarvnaz Chitsaz, the NCRI Women’s Committee Chair, and Zinat Mirhashemi, member of the NCRI from the Fedayeen Organization. Ms. Françoise Schepmans, highlighted women’s rights violations in Iran and how the mullahs’ regime is utterly terrified of the role women play in Iran’s struggle for freedom: “Today is a significant moment in order to support your movement and brave leader Maryam Rajavi. I’m waiting for the day when we could see a free Iran.” Ms. Ingrid Betancourt, who was held hostage for more than 6 years, told the Free Iran rally: “It is a great day of celebration because we are able to express ourselves freely and support the Iranian Resistance without being executed. What is dangerous is not confronting the regime. It is dangerous for the EU to continue to be on its knees in front of the Iranian regime. What is dangerous is that the EU is terrified to bring to justice and condemn the Iranian regime’s diplomat-terrorist who was trying to kill thousands of people at the MEK’s Free Iran rally in Paris last June.

“It is dangerous that EU leaders have forgotten who they are, the supposed defenders of human rights. For a long time, the West thought they should be cautious to find moderates within the Iranian regime, but what we have seen is more missile production, warmongering and interference in Syria and Yemen.

“We want to tell the EU institutions and our leaders that we don’t want the Iranian nuclear deal with the regime, we need to support the Iranian people and Resistance as they put an end to the regime of Iran.” Ms. Sarvnaz Chitsaz reiterated the need for the international community to address gross violations of human rights in Iran including the rights of women, and urged the European Union to form an independent delegation to visit Iranian political prisoners and prisoners of conscience who include many women, and inspect Iranian prisons. She further emphasized on the demands of the participants in the rally from the EU to shut down the Iranian regime’s embassies as centers of espionage against Iranian refugees, and to proscribe the Ministry of Intelligence and Security (MOIS) and Revolutionary Guards (IRGC) as terrorist entities.” Ms. Zinat Mirhashemi emphasized that the fate of the entire region relies on the overthrow of the mullahs’ regime in Iran: “The regime is using different excuses to arrest anyone that is pursuing activities against it. The regime is plundering the people’s wealth to spread chaos and war in the region. The majority of the Iranian people want regime change and they know that there’s no hope for change in their living conditions while the regime still stands.

“The Iranian dictatorship neither wants, nor can, respond to the needs of the people, which is why there are an increasing number of protests across the country. Only the people of Iran and their organized resistance can bring democratic change to Iran. This is totally different from war and appeasement.

“Without the overthrow of the Iranian regime, none of its internal factions can fulfill the needs and demands of the people. We call on the solidarity front against the regime and support the establishment of a secular and democratic state.” Hundreds of Iranian women participated in the rally in Brussels to voice the outcry of their sisters in Iran suffering under the mullahs’ misogynist regime and calling for freedom and democracy which can be only realized by regime change at the hands of the Iranian people’s organized Resistance and the alternative they present, the National Council of Resistance of Iran. They declared support for the ten-point plan of Mrs. Maryam Rajavi for a free Iran and for women’s equal status.