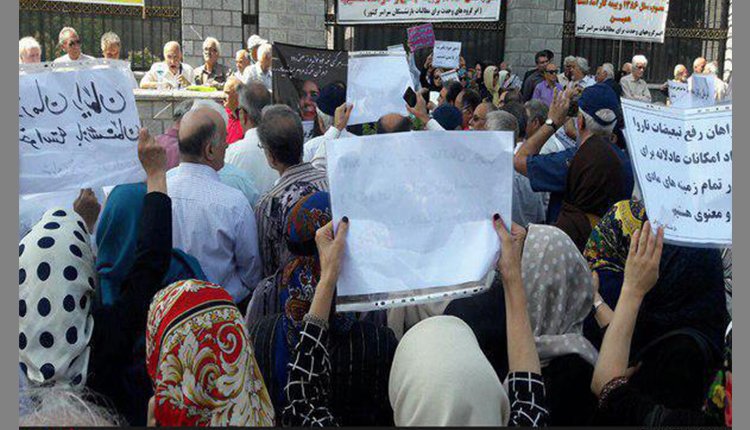 A large group of retirees and former government employees held a gathering to demand their past due payments. Women actively participated in this protest.

The retirees protest was held on Tuesday, June 18, 2019, across from the mullahs’ parliament in Tehran. The protester retirees demand precise implementation of the national services management law, balancing and increasing their pensions as well as improving the quality of medical and insurance services. On the other hand, nurses of Karaj Hospital held more protest gatherings on June 17 and 18, 2019, against the undetermined status of the hospital which was supposed to be auctioned. Women had the main role in organizing this protest held outside the building of Alborz Province’s Cooperation Organization. (The state-run ILNA news agency – June 18, 2019)

On Tuesday, June 18, 2019, a group of law students held a gathering outside the mullahs’ parliament in Tehran in protest to the procedures in the lawyers’ exam and the Majlis’ delay in examining the comprehensive plan on the admission and training of lawyers. (The state-run Tasnim news agency – June 18, 2019)

Monday night, June 17, 2019, the people of Rasht held a protest against violent treatment of a woman by the State Security Force. The SSF dealt violently with a woman for her dress and covering. An SSF agent grabbed her by the foot and pulled her on the ground which outraged those present in the scene on Gilan Blvd. of Rasht, turned it into an angry protest.

On Sunday, June 16, 2019, defrauded investors of Caspian and Samenol Hojaj credit institutes held a protest gathering outside the Central Bank in Tehran demanding reimbursement of their plundered assets. Women actively participated in this protest.

Also on Sunday, a group of pre-school teachers including a large number of women held a protest outside the Governorate of Khuzestan in Ahvaz. These teachers have years of experience but are receiving a meager salary and live in difficult conditions. They said this was the fifth time they were holding protests this week.