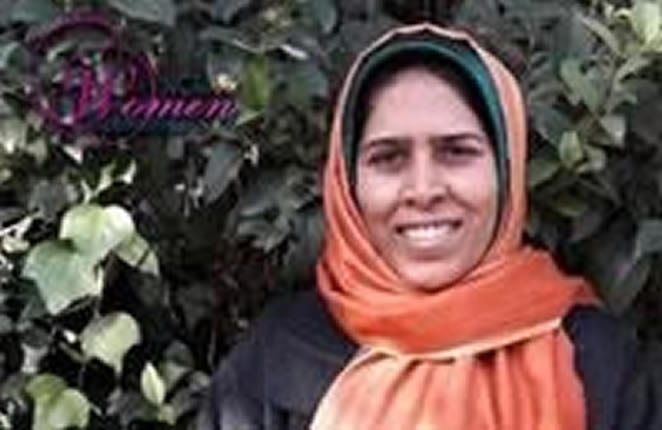 Fatemeh Nosrati speaks with a sweet and beautiful accent. She comes from Iranshahr, a city in south-eastern Iran whose people speak Baluchi.

Fatemeh Nosrati was born in 1971. She has two sisters and two brothers who are all in Iran. One of her sisters was born after Fatemeh had joined the Resistance and hence they have never met yet. Fatemeh Nosrati recalls from her childhood:

Where I grew up, girls’ opportunity and access to education was very limited. Majority of the girls could pursue their studies up to fifth grade when they were forced to become homebound because there was only one elementary school in our town and no middle nor high schools for girls. Should a girl like me chose to attend higher education, she would have to go to an all boys’ school where she would have to put up with many dirty looks and accusations.

Nevertheless, me and a few friends of mine decided to challenge the status quo and confront this tradition, thereafter successfully completing grade 9 but eventually forced to drop out of school.

The backward and misogynist traditions were in fact a barrier to our path and hindered progress especially in pursuit of one’s education.

In the community where I grew up, girls as young as 13 were married off against their will which meant a life with barely any freedom and thus lacking rights to choose a future for themselves.
In such an environment, it was strange for a young girl, such as myself, to be attracted to a political organization.

On getting acquainted with and joining the Mojahedin-e Khalq (MEK), Fatemeh Nosrati says:

I was perhaps 10 years old, a pre-teen who, for the very first time, heard the name of the PMOI/MEK through my cousins who were political activists working with the Mojahedin.
Mohammad Amin Daneshpip, a family friend who later died in Iranshahr in 1986 in his fight against the dictatorship of Velayat-e Faqih (supreme clergy), was very influential in my acquaintance with the PMOI/MEK.

It was through Mohammad Amin when I first met a group of PMOI/MEK supporters in our town who were actively advocating for human rights and freedom. I found their conduct and manners, and their humane attitude, very attractive from the first time and I remember well that they were referred to as “the pure and genuine people.”

From 1984 to 1986, I was closely following and observing the activities, behavior, and attitudes of these young group of fans in our neighbourhood. Yet it was solely through my acquaintance with them that helped me envision a new path in my life.

I remember that on a November day in 1986, I decided to go to one of the MEK’s bases and see them through a different lens and from another perspective.
I hadn’t made up my mind in staying or joining their ranks, so I left home without saying goodbye to anyone. The last sight I remember was that of my mother who was advising me to return to her soon.

In order to visit the MEK in Ashraf, I had to go through Pakistan. There, I saw a number of PMOI/MEK women whose tender and caring relationships filled me with warmth, delight, and respect for their path and ideals. And for the first time, this experience aroused in me a desire to be and remain with them.

After two years, in 1988, I finally managed to get to Ashraf. My inner voice was telling me that I had found home, the place I had been in search of.
My family contacted me shortly after and asked me to return home. My father, mother, and even my uncle. The image they had of me was that of a young girl whose entire life had been determined by others.

Fatemeh Nosrati explains how she managed to make her final decision:
I had a dilemma and found myself stuck between two very difficult choices; on the one hand was my family and loved ones and on the other, I had found a group of people whose goals and aspirations were what I strongly identified with and had searched and wished for all along in my life.
I truly believed that this was the network that would teach me real life experiences and lead me to freedom. Therefore, my final decision was staying and fighting for the freedom of a country, liberation of a nation, and especially the emancipation of tens of millions of oppressed and exploited women, whom I was just one example.

Today, 30 years have passed since that day.

And, for 30 years, I have been experiencing a beautiful life in every moment of a struggle for freedom. I hope to continue until the day I achieve it and I am very proud to have made such a decision.
I have no doubt that the bright morning of freedom will shine over my homeland, in which my mother and father and dear uncle, will understand why I made this choice and why I persevered on this path.