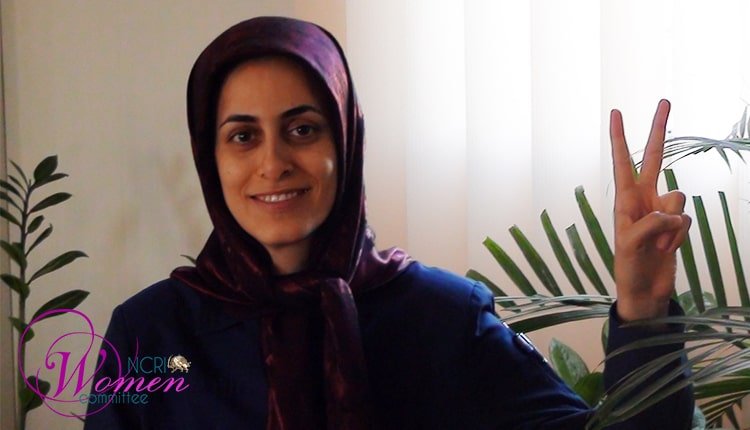 Ronak Nikbakht is a young Mojahed whose eyes speak of courage and enthusiasm. Ronak is 31 years old and from Tehran.
Prior to joining the Resistance, she was a strong and talented swimmer whose skills had the promise of growth and success. Ronak describes that period as follows:

I used to be afraid of water when I was a child. However, my mother sent me to swimming classes.  I still hadn’t reached school age at the time.
I remember the very first time I jumped into a 6-meter-deep pool, despite the fact that I was terrified, I felt that I was one with the water and let myself enjoy its beauty.
I can clearly recall in detail as the bubbles and layers of water caressed my face and eyes.
That was when I realized that fear curtails beauty in one’s life! And what one can achieve by overcoming fear.

During the period of my training, I won two gold medals from Tehran’s swimming clubs. That was when I was about 8 to 11 years old.
I had specialized in breaststrokes. In fact, the breaststroke is my favorite style because the swimmer can see and keep an eye on the horizon as she moves forward.

In addition to swimming, I also ranked in the examinations of Tehran’s School for the Exceptionally Talented in two occasions. I became third the first time around in 1999-2000 academic year and ranked fourth in the following year.

On the numerous restrictions Iranian women face under the mullahs’ rule, Ronak explains:

Naturally, every young person such as myself, who’s active in sports and succeeding in education, looks at their future career, and wonders how and where can one serve the community and one’s people?
I could never visualize one such future and career in an Iran under the theocratic regime’s rule.
I liked to pursue law, but the possibility of becoming a judge, according to the clergy’s misogynist laws, was prohibited for a woman.
I also liked to become a pilot, but piloting was also forbidden for women.
And even in swimming, I knew that there was no chance of professional training or competing at the championship levels for girls, because this regime had made hijab compulsory and their humiliating practices and inequalities in women’s sports was and is highly discriminatory.

As I got older, observing these limitations on women and girls and while tackling them in my own experiences, propelled me to make a serious decision.
I thought to myself no matter how much I struggled to succeed in such fields as sports and science, or in my intellectual endeavor, under the rule of a misogynist dictatorial regime and the limitations it imposed on women, Iran was not a country which I wanted to represent.
Hence, I asked myself a serious question: What should I do?

Ronak goes on by explaining how she answered this big question in her life and how she chose to join the Mojahedin and the Iranian Resistance:

I realized the only response to my question is to fight the ruling regime! For the only way to overthrow the regime was to fight it and get rid of it so that my people, especially the women and youth of my country could live in freedom, peace, and equality.
But the next question which immediately found myself pondering over was: am I willing to pay the price for overthrowing a dictatorial regime in order to eliminate all the discrimination and inequalities that I have witnessed and replace all the adversities with freedom and equality?
Or do I want to consciously overlook all the obstacles and limitations?

I finally decided to answer this question and chose the harder route, meaning the first path, and that is my mother, who had also chosen to fight for freedom, and I joined the Mojahedin.  I am proud to say I have been part of the Resistance ever since I joined in 2002.

It has been sixteen years since I am part of the PMOI/MEK, having spent more than half of my life with them …

After joining the movement, Ronak had another major achievement, being a decision-maker:

I think the sweetest thing for me, after having chosen to fight, is being the decision-maker.
I love the fact that I can fully and freely choose my life in each moment and welcome all of highlights and challenges.

I believe the main difference between a fighter and an ordinary person who lives his/her own life, is that both see the problems and paradoxes, but one turns a blind eye on them yet the other chooses to solve them!
Nothing is sweeter than pursuing a goal in one’s life.

I think that in the course of the past 16 years, the struggle has become sweeter for me with each passing day, because every day I have more understanding and awareness of how powerful I am and how much I had neglected this very special human power found in myself and those whom I have been fighting alongside.

I am beginning to understand how in the course of social evolution, in order to promote and achieve a common goal, one as big as liberation of a nation, one must be able to aggregate the surrounding population and multiply their energies.

A climber never dares nor can reach the tough peaks alone.

And for us who have chosen such a high summit as freedom, we can only achieve this goal by relying on our powerful team.

Maliheh Moghaddam: We are the invincible ones, not the interrogators!