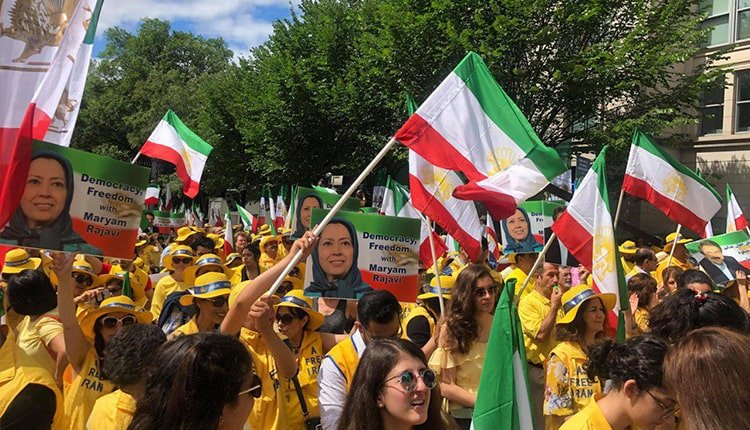 Many women were among the thousands of Iranian-Americans who gathered in Washington D.C. on Friday, June 21, 2019, to declare their support for the anti-regime protests in Iran and the 10-point plan of Iranian opposition leader Maryam Rajavi.

The event started with a large gathering outside the U.S. State Department, and subsequently participants in the Iranian-American rally for a free Iran marched down to the White House.

Bipartisan support from US Congress

The rally also featured a video message from the President-elect of the National Council of Resistance of Iran, Mrs. Maryam Rajavi, who urged the United States to be more decisive in its Iran policy. She reiterated, “When the mullahs pay no price for their conduct, they become more emboldened and go even further. Firing of rockets in Mosul and Basra and the missile attack on the U.S. drone are clear examples.”

In another part of her message, she pointed out, “We do not want anything more than freedom and human rights, which will of course also open the way for us toward development and justice. This will ensue peace and security in Iran and the Middle East; an Iran free of religious fascism, a non-nuclear Iran and an Iran without terrorism and belligerence.” Young Iranian Americans: We are the voices of the Iranian youth

Sadaf Mirzai, a representative of young Iranian-Americans in the U.S. from Atlanta, Georgia, told the gathering, “We are the voices of the Iranian youth being silenced by the Iranian regime. We will not be silenced. Whether being shot in the streets for demanding a political voice or being harassed in public for not complying with the phony dress code, our generation inside Iran have been targeted by this regime in what amounts to nothing less than a war on youth and a war on innocents…

“We all support Maryam Rajavi’s call for a non-nuclear, secular republic that stands for legitimacy of ballot box, rule of law, separation of mosque and state, abolition of the death penalty, equality regardless of gender, race, religion or ethnicity, multi-party system, a free market economy, universality of human rights and international norms that advocates climate justice, and most importantly, a peaceful coexistence.

“We, youth representatives from all across the United States join this rally today to express our solidarity with the brave teenagers and young professionals in Iran who have taken to the streets over the past year, yearning for a free Iran and a better tomorrow.”

The final speaker to the rally of Iranian-Americans, was the NCRI’s U.S. representative, Ms. Soona Samsami. She told the gathering, “We have come together today to tell the world that 40 years of our experience in the Resistance says that the tyrant mullahs ruling Iran understand only one language and that is the language of force and decisiveness… This is how the Iranian Resistance grew stronger. It did not cave in to the murderous mullahs and launched a full-fledged battle. Despite the heavy price it paid including the loss of 120,000 of its members and supporters, and countless others who were incarcerated and tortured, today it is proud to have preserved the honor and dignity of her nation and is the Iranian people’s focal point of hope as the sole viable alternative to the clerical regime in Iran.”

Ms. Samsami urged the international community to recognize the Iranian people’s right to resist and overthrow the clerical regime, and the National Council of Resistance of Iran as its only legitimate and viable alternative.