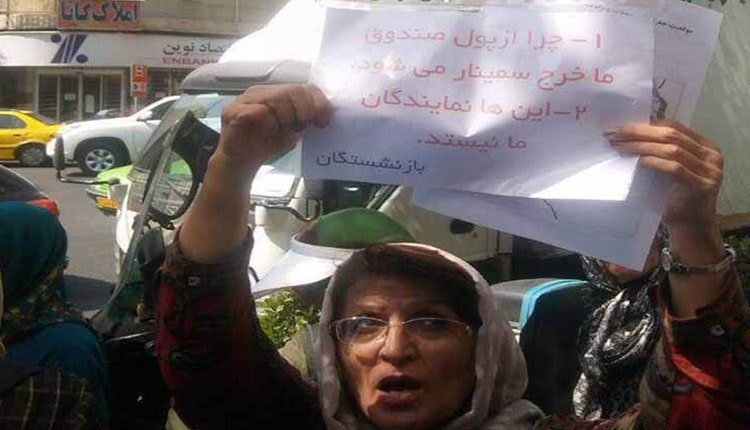 A group of educators of the Literacy Movement in Tehran held a gathering on Tuesday, July 2, 2019, outside the National Organization of Employment Administration to demand implementation of an act adopted by the parliament in 2016 obliging the Ministry of Education to permanently recruit educators and teachers on temporary contracts.

The protests by contract teachers and educators of the Literacy Movement have been going on for more than two years in front of the Ministry of Education, the parliament and now, the National Organization of Employment Administration but they have not yet received any response to their demands. Some of the educators of the Literacy Movement have to travel 12 hours to reach Tehran. (The state-run ILNA news agency – July 2, 2019)

Most of these educators and teachers working on temporary contracts are women.

On Wednesday, July 3, 2019, a group of defrauded clients of Shideh Airline Coop gathered outside the Judiciary Complex in Tehran and demanded their properties. The airline coop has not delivered the houses belonging to the employees of Mehrabad and Parand airports after ten years. The women in this protest held a placard which read, “Major Swindle in the National Airline Company.” On the same day, a group of teachers and retirees gathered outside the building of the National Retirement Fund in Tehran. Women participated in this protest in large numbers.

On Monday, July 1, 2019, a group of employees of the University of Lorestan also held a gathering inside the university campus to demand their wages unpaid for three months.

On the same day, a group of stewardesses of Mahtab Sirjam Company in Andimeshk, Khuzestan Province, held a gathering outside the station in Andimeshk, protesting lack of job security at this company and against the lay-off of their co-workers. Mahtab Company is laying off 57 of its employees who have between 15 to 20 years of experience.

Also on July 1, a group of clients of Ramak Khodro Company held a gathering in protest to the newly announced high prices for the vehicles they have already bought. The company has refused to deliver their cars. Their protest was held outside the Ministry of Industries, Mines and Trade in Tehran. Women actively participated in this protest. (The state-run Mashreq news website – July 1, 2019)