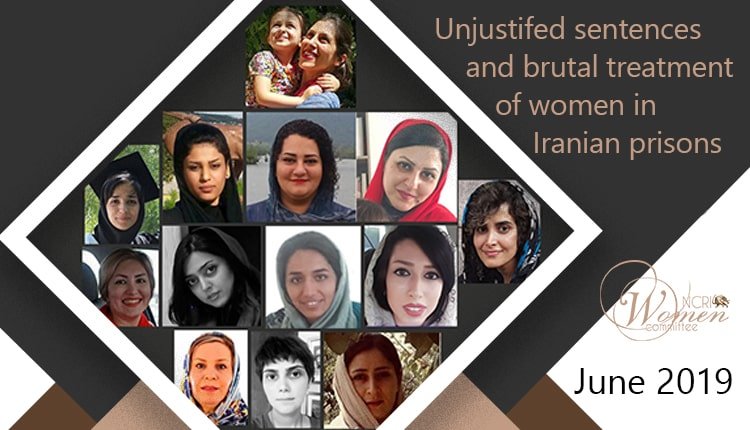 Unjustified sentences and brutal treatment of women in Iranian prisons

Unjustified sentences and brutal treatment of women in Iranian prisons

There have been reports on some 20 female rights activists who got imprisoned or brutalized in prison during the month of June. Some were handed down heavy sentences and others transferred to prison to serve their sentences.

On the other hand, the regime has stepped up executions, including of women, to tighten up the general social atmosphere.

The executions and dastardly killing of prisoners in jail, however, have proven to fuel further discontent and opposition among the populace as demonstrated in the funeral of Alireza Shir-Mohammad-Ali.

In the monthly report of the NCRI Women’s Committee Monthly Report – June 2019 we read:

The 89th execution of a woman

The month of June saw the execution of another woman, the 89th to be executed during Rouhani’s term in office. Fatemeh Nassiri who had been imprisoned in Qarchak Prison for 11 years, was hanged on June 19, 2019, in Ghohardasht Prison, a.k.a. Rajaii-shahr. She had reportedly claimed responsibility for a murder committed by her son.

Death penalty for a mother defending herself against rape

Shocking was the death sentence issued on June 25, for Soghra Khalili, 36 and mother of two, for defending herself against rape.

She has been in jail for seven years. Her 4-year-old son is staying with her in the Central Prison of Sanandaj. Her other son is 14 and is living with his father.

Omid Badri, Soghra’s husband said, “The death verdict was issued in 2015, but the murder my wife committed was in defense of her dignity. There was a man who disturbed my wife and harassed her. The residents of our village know that the victim had harassed several other families in the same way and put pressure on other married women. Ali (the victim) did not leave my wife alone, while she was a married woman. Finally, my wife got tired and stabbed him to death.”