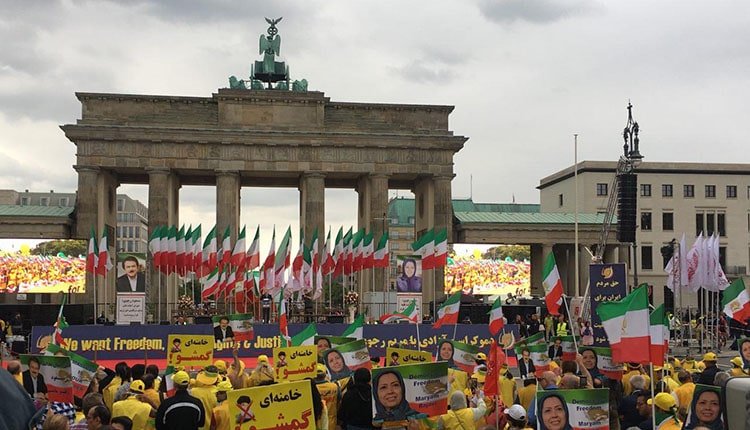 More than 15,000 Iranians, including thousands of Iranian women, held a massive and impressive demonstration on Saturday, July 6, 2019, in Berlin before the Brandenburg Gate. The rally came on the heels of two previous rallies by the Iranian diaspora in Brussels and Washington, D.C. in June.

Iranians participating in the Free Iran rally and march in Berlin declared support for the Iranian people’s uprising, and their struggle for regime change and the establishment of democracy and people’s sovereignty in Iran. They expressed support for the PMOI/MEK, the National Council of Resistance of Iran (NCRI) and its President-elect Maryam Rajavi and her 10-point plan for future Iran. The participants including thousands of Iranian women carried banners which read, “Mullahs’ regime is incapable of reform or a change of behavior” and “”Time for a FREE IRAN with Maryam Rajavi.”

In a video message to the rally, the NCRI President-elect Maryam Rajavi called on Europe to stop the policy of giving concessions to the religious oppression and protecting the mullahs from being overthrown. “Each euro of trade with the clerics is a euro for fueling Khamenei’s repression and war machine,” she stressed.

She also urged Chancellor Angela Merkel to lead a special initiative on the European level against the clerical regime’s violations of human rights to stop among others the persecution, execution and murder of prisoners under torture, and to form an international delegation to visit Iranian prisons and political prisoners.

In powerful remarks to the Berlin rally, Ms. Ingrid Betancourt said, “We want to tell Khamenei (the mullahs’ supreme leader), we’re coming for you. We will hold you accountable for all the people you killed because they supported freedom and justice…

“We believe in the MEK, in its values and what it fights for. We are here to say to our governments in Europe that we don’t want any more agreements and concessions with the criminal government of the mullahs…

“We are here to defend our values and principles, and it doesn’t matter where we stand, left or right. The fight of the Iranian Resistance is our fight.”

The NCRI representative in Germany, Dr. Masumeh Bolurchi, also stressed that the mullahs’ regime is at its weakest point ever in the past 40 years. She said, “Our message to those who are trying to keep Iran’s regime in power is, you are on the losing side of history. The mullahs’ regime is doomed to be destroyed. To those who are demonizing the MEK and trying to help the regime, and to those so-called ‘journalists’ in the West who are working with the Iranian regime’s Intelligence Ministry agents, know that you are on the wrong side of history. We call on EU member states to put the regime’s Ministry of Intelligence and Security (MOIS) and the Islamic Revolutionary Guards Corps (IRGC) on the list of terrorist organizations and expel their agents from their soil.”

Pressures and restrictions lead to fatal consequences for young women