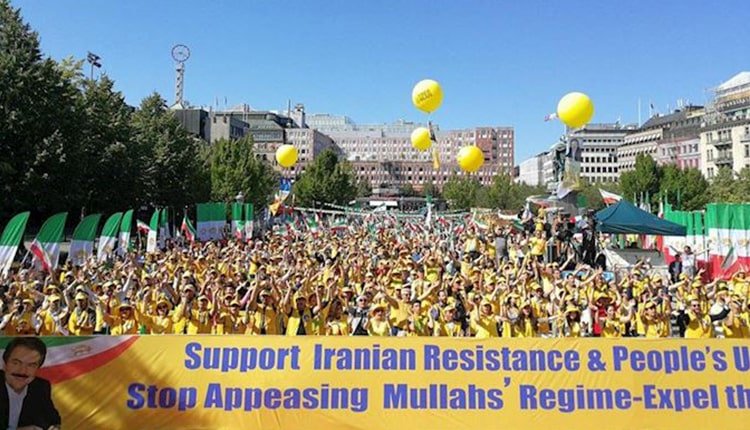 Some 5,000 Iranians including a large number of Iranian women participated in a major demonstration in Stockholm on Saturday, July 20, 2019, calling for a firm policy and comprehensive sanctions against the mullahs’ regime in Iran, terrorist listing of the IRGC, the MOIS and Khamenei’s office and headquarters. Iranian women also called for recognition of the right of the Iranian people to resist and establish democracy in Iran.

Iranian women and participants in the rally announced their full support for the PMOI and resistance units inside Iran and supported Mrs. Maryam Rajavi, President-elect of the National Council of Resistance of Iran and her ten-point plan for the future of Iran.

In a video message to the participants in the rally, Mrs. Maryam Rajavi said that the time of appeasement with religious fascism in Iran has come to an end, and the resistance and popular uprising have brought the regime to the end. There is no place for the minimum human rights, freedom of expression, justice, equality between women and men, the autonomy and the rights of minorities and nationalities, in the clerical regime.

She called on the Nordic governments to put pressure on the Iranian regime to open up prison gates and accept an international investigation commission.

The rally featured among others a speech by Rama Yade, the former Minister of Human Rights of France.

Ms. Rama Yade said in part, “I’m coming from Ashraf 3. In Ashraf 3 I saw the impossible. A moved woman stands in front of you. This city was built in less than two years, in the middle of nowhere. You have proved through that amazing master work in Ashraf that the same could one day be done in Iran. It took your suffering and your hope and your discipline, but it was also because of your thousands of martyrs that Ashraf exists today.

“We saw pictures of hundreds of young people who were killed by the regime, the people who were killed in the massacre in Ashraf in Iraq, the victims of the 1988 massacre. Ashraf 3 is a land of hope. Ashraf 3 is a reminder of the desire of the Iranian people for change. The demonstrations in Iran show what the Iranian people want democracy, not dictatorship; freedom, not terror. We have to listen to those cries.

“The international community was skeptical of the protests; they did not recognize the revolution. They did not listen to the voices of the Iranian people? Why? Because of a nuclear agreement that is dead and buried. They didn’t recognize that you can’t negotiate with this regime.”

“At a time when the world seeks a solution to Iran, we must think of an alternative. I think it’s the PMOI/MEK. They are not only an opposition, or even an alternative, but like a state that is ready to save Iran from the destruction that the religious dictatorship has brought.

“The Iranian Resistance has identified this threat long ago. Its members have paid the price. You have proven that Islam matches its principles. You are supporting gender equality, freedom of religion. PMOI knows what women have brought to Iran. Iran would not have been a great civilization without women. Iranian women have been standing in the streets and squares, women and sisters and mothers. They go to jail; they accept harm to themselves.

“I met people there who devoted all their lives to the freedom of their people.”

“Your commitment is an extraordinary, a powerful daily act of faith and determination. Thanks to you, change is coming. This incredible change has the strong voice and the beautiful face of a role model, president Maryam Rajavi.”

Ms. Mahnaz Salimian, Senior Secretary of the National Council of Resistance of Iran, also addressed the gathering. In part of her speech, she said, “We are here to send a strong message to all those who are still dreaming of appeasing the Iranian regime and are thinking of constructive dialogue with this regime. The first and last message of the MEK’s Resistance Units and the youth of Iran is the overthrow of this regime.”

“This regime is trapped in a dead end and has no way out. The people of Iran and the Iranian Resistance are ready to answer to this situation. We tell European countries and the Swedish government that we don’t want anything but ending the appeasement policy and standing on the side of the Iranian people,” she added.

“For the Iranian people, any relation by the EU with the regime’s Intelligence Ministry (MOIS) and the Revolutionary Guards (IRGC) or with the regime in its entirety is a red line that must not be crossed. The MOIS and IRGC must be designated as terrorist organizations. All of the regime’s embassies must be closed and its diplomats expelled. The perpetrators of the 1988 massacre must be held to account,” Ms. Salimian concluded.