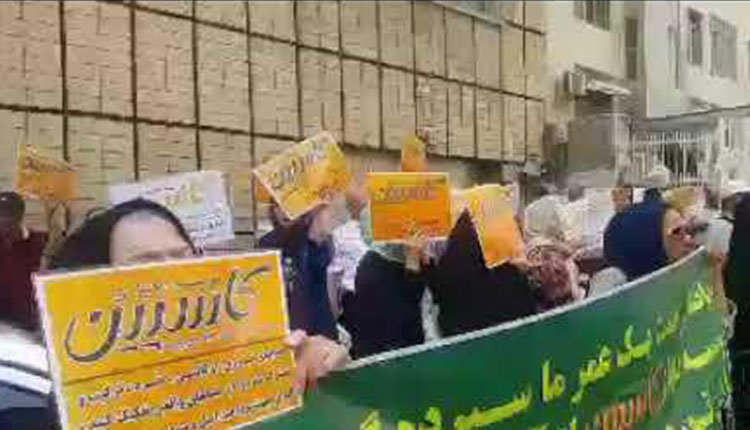 Active participation of women in protests in different cities of Iran

On Tuesday, July 23, 2019, women had active participation in seven protests throughout different parts of Iran.

The contractual teachers of Zarrin Shahr in Isfahan gathered on Tuesday, July 23, 2019, in front of the Education Department in Isfahan, protesting against their undetermined employment status. The active participation and presence of women were notable among the protesting teachers.

On July 23, 2019, 250 employees from the Aria-Shahr Hospital in Rasht stopped working and went on strike. The employees protested against the unjust reduction of between 500,000 to 700,000 tomans of their wages. “For more than a year, the salaries and other benefits have been discontinued and no payments are made to the hospital’s personnel,” said a staff member at the hospital.

The defrauded clients of the Caspian Credit Institution gathered in front of the institute’s central office in Tehran on Tuesday, July 23, 2019, and demanded the return of their looted money. Women also had a strong presence and active participation in the protest gathering.

On the same day, the residents of Sadra city, in Shiraz, protested against several days of water outages. The deprived and angry women gathered in front of the city’s water department holding empty buckets and dirty clothes in protest. One of the protesters said, “The water was supposed to be rationed for only two hours a day, but we have not had water in our houses for several days now.”

The people of the Mazdak district of Boyer-Ahmad County gathered in front of the city’s Governorate building in protest to the constant outages of drinking water. Women had significant and active participation in the protest.

The families of the victims of the accident at the Jahrom–Lar intersection also held a protest rally on Tuesday in front of the Road and Urban Department in Larestan, with the active participation of women. (The state-run Asr Iran website – July 23, 2019)