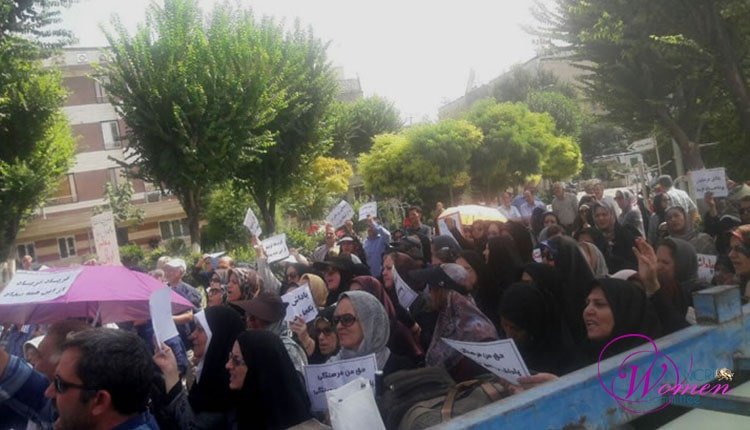 A two-day protest demonstration by retired teachers was attacked by the State Security Force (SSF) on Sunday, but protesters defied the raid and carried on with their protest gathering.

Retired teachers held a protest gathering on Saturday and Sunday, July 27 and 28, 2019, outside the Budget and Planning Organization in Tehran. One of the retired teachers fainted during the protest on Sunday, due to psychological pressure, and was transferred to hospital.

The retired teachers chanted, “We’re not going to be fooled by hollow promises.”

The video clips from this protest circulating in social media show that the State Security Force attack the retired teachers to disperse their gathering, but they resist and refuse to go away.

A retired female teacher has been cited as saying, “You (the SSF) behave in a way as if you learned of our complaints just yesterday, while our protests have been going on for at least 11 months.”

In other developments, defrauded clients of Ramak Khodro held a gathering outside the Justice Ministry on Saturday, July 27, 2019, to protest the company’s failure to deliver their cars and at the same increasing their prices. The protesters demanded investigation into this case.

Defrauded investors and clients have been holding various protests in different parts of Tehran including in front of the Industries, Mines and Trade Ministry. One of their placards read, “Are 6,000 defrauded investors not enough?”

On Friday, July 26, 2019, the mother, friends and acquaintances of Alireza Shir-Mohammad-Ali and a group of civil activists commemorated him on the 40th day since his passing away at Behesht-e Zahra Cemetery. The 21-year-old political prisoner was viciously stabbed to death on June 10, 2019, in a premeditated plan by two inmates recruited by authorities of Greater Tehran’s Penitentiary, aka Fashafouyeh Prison.

On Thursday, July 25, 2019, residents of Pardis district in Ahvaz, capital of the southwestern Khuzestan Province, held a protest against the construction of a Sewage Pumping Station in this district. (The state-run Tasnim news agency – July 25, 2019)

On Tuesday, July 23, 2019, a group of workers of Bakhtar Biochemical Company held a protest gathering in front of the Governorate’s building and the Organization of Industry, Mine, and Trade in the city of Kermanshah, western Iran, complaining of the problems they face in their job. (The state-run IRNA news agency – July 23, 2019)