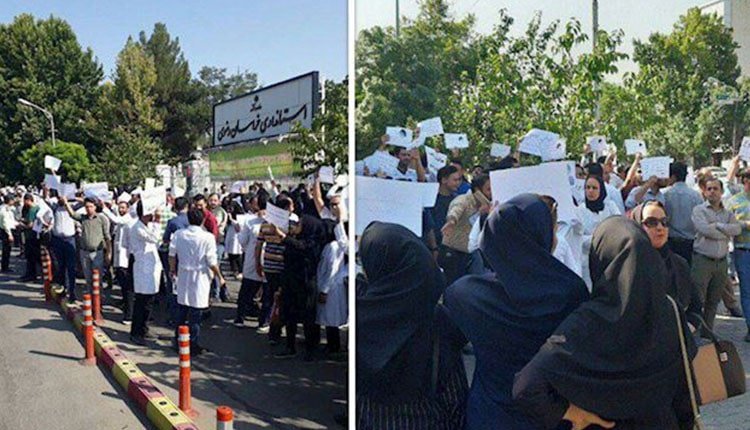 Nurses working in hospitals of Mashhad held a protest outside the Governor’s Office in this capital of Khorasan Razavi province in northeastern Iran, on Saturday, August 3, 2019. They demanded to receive their wages and overtime dues.

Nurses have held various protests in different cities across Iran because they do not receive their salaries and wages despite working under harsh and harmful conditions.

The protesting women said, “There are no one left in Nasrabad. They should arrest the remaining few and pave the way for the confiscation of our lands.”

Nasrabad is a village located in the cool areas of Yazd in central Iran.

A group of civil activists including a number of women activists went to the Department of Education of Shahriar, to follow up on the situation of Mohammad Habibi. They said the department had rejected the request for granting him paid leave. The rejection is significant because the Department of Education can subsequently lay off Mohammad Habibi since his imprisonment has become lengthy.

Imprisoned teacher Mohammad Habibi, was arrested for the second time on May 10, 2018, in the teachers’ gathering on Teachers’ Day in Iran. He has been sentenced to a total of 9 years in jail plus 74 lashes. He has also been deprived of having activities with any political or social party or group and of leaving the country for two years.