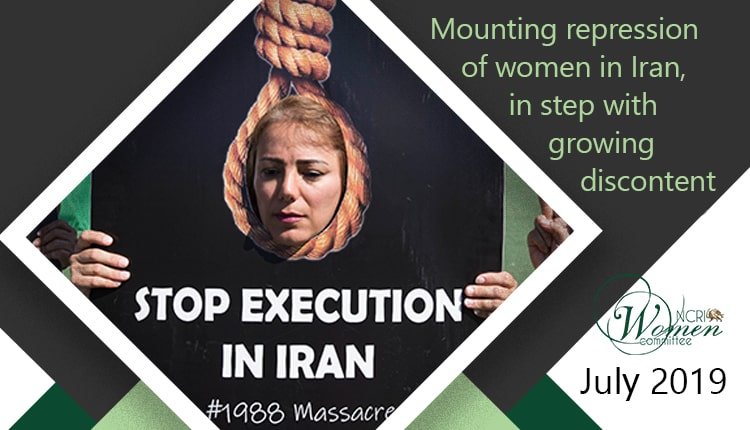 Mounting repression of women in Iran, in step with growing discontent

July was marked by brutal clampdown on Iranian society, including women. Beset by a whole host of economic, social and political crises, the clerical regime has been trying to rein in simmering social discontent by use of brute force.

The unprecedented executions of four women in just eight days bespeaks of the oppressive conditions in Iranian society.

Heavy sentences issued for civil and human rights activists as well as the heavy handed treatment of political prisoners detained together with common criminals in breach of the separation of prisoners’ principle are also stark indications of mounting repression in Iran.

The regime has also geared up its efforts to counter Iranian women’s defiance of the compulsory veil by taking extraordinary measures even at shopping centers and airports.

Four women hanged in matter of a week

Although execution of women is higher in Iran than in any other place in the world, and the Iranian regime is a record holder by executing 93 women during six years of Rouhani’s tenure, but there had never been a week or even a month when four women were executed.

Maliheh Salehian from Miandoab was hanged on July 16, 2019, in the Central Prison of Mahabad, in the western Iranian province of Kurdistan.

Arasteh Ranjbar and Nazdar Vatankhah, two in-laws who had already spent 15 years in prison, were hanged in the Central Prison of Urmia, northwestern Iran, on July 23, 2019.