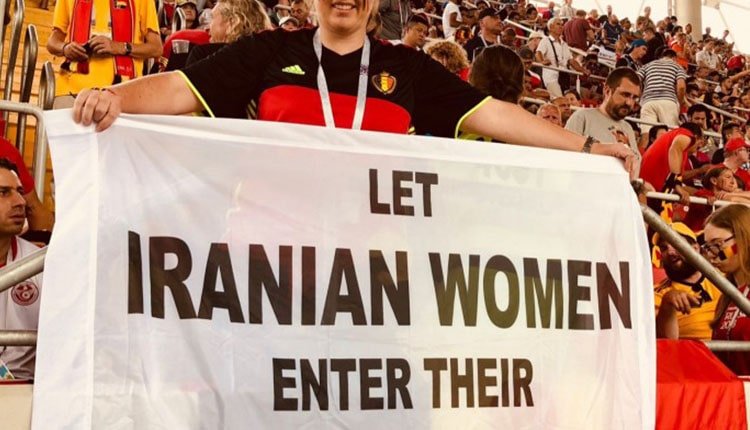 With the World Federation of Football Federation (FIFA) setting a deadline for Iranian women entering the stadiums to watch football matches in Iran, this issue has again become a trending topic of the day. However, the Attorney-General and the religious authorities of the mullahs’ regime continue to oppose the subject.

Attorney-General of Iran, Mohammad Jafar Montazeri opposed the topic of women entering sports stadiums and said, “Do you think this a simple matter when FIFA officially announced that if women are not allowed to enter the stadiums they will ban Iran from attending international matches? That is not an easy thing to say. What business is it of FIFA for a country where 10, 500, 1000, or 5000 spectators go to watch football that a number of them have to be women?”

The Attorney-General added, “Do they feel sorry for women when they are pining for women to be allowed to enter stadiums in Iran? Are they worried about our sports centers? Worried for women not being deprived of the great graces of watching football? Do not take this as a simple matter.” (The state-run ISNA News Agency – August 7, 2019)

Regarding the women’s entrance into stadiums, Makarem Shirazi, one of the regime’s religious authorities also said, “The environment in the stadiums is not suitable for the presence of women… Therefore, women need to refrain from attending such programs. Especially since they can watch them from the media and their presence is unnecessary.” (The state-run Aftab News Agency – August 5, 2019)

Previously, Makarem Shirazi had explicitly stated, “This plan was also put forward in the previous government, but both the leadership and the authorities opposed it, and unfortunately despite having knowledge of this issue, some are still seeking approval of the directive. Mentioning this issue again will be a deviation from our path.” (The state-run ISNA news agency – November 28, 2017)

FIFA has given the Iranian regime until August 31, 2019, to agree to allow women to enter stadiums. President of FIFA, Gianni Infantino has issued a letter to the Football Federation in Iran to guarantee the presence of women in stadiums in the 2022 FIFA World Cup qualifications. In another letter, he regretted that during the match between Iran and Syria, the doors to Azadi Stadium were closed to female fans and that a number of women who wanted to be present in the stadium had been detained by security forces for hours.