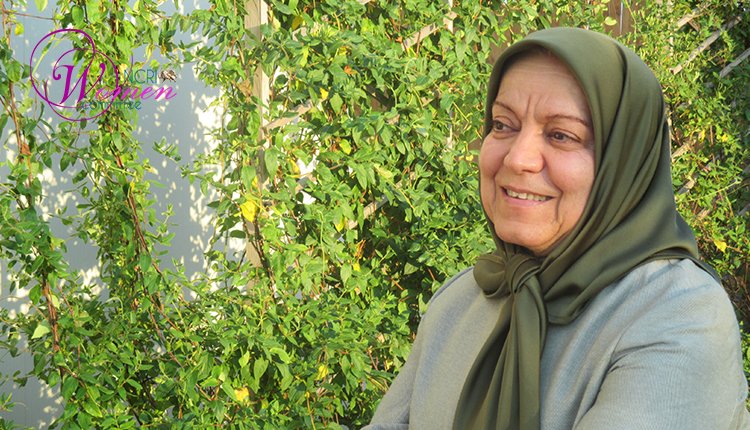 Minoo Behnam is someone who has seen the last glances of human beings in the last moments of their lives and has seen and experienced the determination in the eyes of freedom fighters to overcome the most difficult circumstances.

With a relaxed demeanor filled with confidence, Minoo Behnam introduces herself and says:

I was born in 1951 in Kangavar city in Kermanshah province. We were 5 siblings and I was the third child of the family. I was only in Kermanshah until I was 14 because of my father’s job as coordinator of the census bureau. I received my high school diploma in Shiraz and my Bachelor of Science degree in nursing from Isfahan University. I worked as a nurse in Tehran and Isfahan for 10 years and supervised several hospitals in Tehran for a while.

After the 1979 revolution, I continued following the PMOI. Even though I was not a member of the organization but I supported them and while working at the hospital used to contribute financially and take part in their rallies and demonstrations. My support continued until the day my two cousins Mohsen Farshid[1] and Mojtaba Farshid[2] were killed by Khomeini’s agents.

After that point being a simple supporter was no longer enough. Their blood had a message for me which was a call to continue their path.

But the reality was that inside the country it was not possible to join the PMOI. In the 1980s, anyone thinking of joining the PMOI would face arrest, imprisonment, torture, and execution. I decided to leave Iran and join the PMOI. I had two little daughters, Maryam and Ashraf so all three of us left Iran at the same time.

Minoo Behnam went on to explain about her duties after she joined the PMOI:

More than 30 years have passed since my arrival at the PMOI base and joining the organization. Because of my medical training and background, I have been involved in the PMOI medical clinics since the beginning and have spent most of these three decades helping the sick and injured sisters whom I love more than life itself.

Moments and scenes that took my breath away and left me speechless.

One of the most painful moments I have ever encountered was when I saw Mahnaz Bazzazi’s bloodied body after the PMOI headquarters were bombed in Iraq.

A skilled nurse shows her courage by maintaining calm and keeping her control when faced with an extraordinary situation.

After the bombing, in pitch darkness, I tried to find Mahnaz through all the rubble and destruction. To use my two hands, I held the flashlight by my teeth and stepped forward. Within a short distance, the light fell on Mahnaz whose both legs had been cut off from above the knee. She was in excruciating pain.

To stop the bleeding, I wrapped her up in a sleeping bag and moved her to the hospital. After a couple of major surgeries, she was finally stabled but confined to a wheel chair for life. Shortly after she was able to receive visitors, a number of Manaz’s friends came to visit her. Everyone had tears in their eyes and no one wanted to see their brave commander in pain confined to a wheel chair.

They entered Mahnaz’s room and were all shocked when they saw her in such high spirit and full of life. She greeted them as her usual self, full of life and laughter offering them fruit and candies while reminiscing memories lifting everyone’s mood.

I thus witnessed her commanding her greatest battle far beyond any battles she had ever commanded before. In my opinion, at that moment, she promoted the spirit of a great revolutionary woman who despite the hardship she was encountering, was full of life and hope for the future.

Another memorable moment which I will never forget is when I saw a young and beautiful woman by the name of Elham whose body was shredded to pieces in an attack by the Iraqi security forces at the behest of the Iranian regime.

Elham was lying silently on a stretcher. She was injured trying to protect her comrades from being hurt and in return she took the brunt of the attack on herself. As she laid quietly on the stretcher, she called out my name. As I turned my head, I saw her shattered legs and hands, but her look was as determined as ever. As an experienced nurse I knew that a woman in such a condition would be suffering excruciating pain but Elham was as quiet as could be. Her patience and calm demeanor called every observer to double their effort and dedication while trying to cover the pain and rage they were feeling from within.

I would like to give an example of the beauty and smiles of these years as well.

For us Iranians, the last Tuesday night of the year is a special. On this day, we hold the annual fire festival celebrating the overcoming of light over darkness.

One of my patients had a difficult condition. She had undergone a major surgery on her head and eyes and her condition was such that doctors had given up on all hope of her ever recovering.

Her hospitalization coincided with the Fire festival is held on the last Tuesday night every year.

I decorated her room with authentic Persian tradition to make her happy and try to give her the sense of festivities. With a beautiful smile she jokingly said, “What about my fire festivity?”

I knew she did not have the physical ability to go outside and join everyone else jumping over fire and celebrating the tradition, but since I always tried to accommodate my patients, I came up with an idea. I went to the nursing office and got some alcohol and cotton, put some alcohol in some fireproof containers and set fire to the cottons in the containers.

From the lit fire, the room had illuminated and had become so beautiful. As is the tradition we held hands and jumped over the flames and vowed to use the flames to burn down all evil and keep it burning till goodness and beauty returns to our land.

Many years have passed by and the resistance has experienced many sweet and bitter moments, but when I look back, the one thing that shines through all the ups and downs, is the strength of the women who shared their hardest and most beautiful moments with me over these years. And through all the pains and suffering and all the tears and smiles, I can see in them and I am deeply confident that my country’s bright future will come true.

[1] Mohsen Farshid was a veterinarian and candidate for the Mojahedin in Kermanshah who was martyred in clashes with the Revolutionary Guards in Tehran in 1981.

[2] Mojtaba Farshid was an active student of the Mojahedin who was arrested and executed in Tehran in 1981.