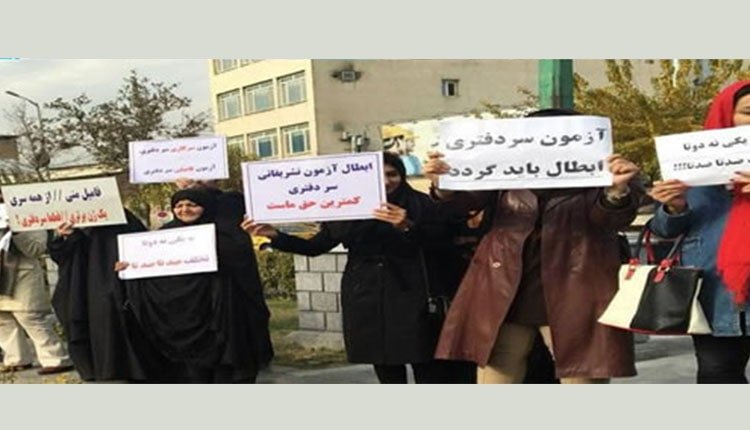 In recent days, protests by different strata, along with the participation of women, have taken place in various cities across Iran.

A group of defrauded creditors who have lost their money to the Revolutionary Guards affiliated Caspian Credit Institution gathered in front of the central bank in Tehran on Sunday, August 18, 2019, to demand their plundered savings.

The protests by depositors of financial and credit institutions in Iran began three years ago and so far the mullahs’ regime and the Central Bank have not responded to their rightful demands. Women, in particular, have had an active and significant presence in the protests of defrauded creditors.

On Sunday, August 18, 2019, a group of animal rights advocates, including women, gathered at the waste site in Kahrizak and protested against killing dogs. The protest was held against the municipal authorities for killing dogs with acid.

On Saturday, August 17, 2019, a group of parents of two girls’ elementary schools in Hamadan held a gathering in front of the Hamadani Azad School building in protest to the lack of attention to their demands. More than 250 parents participated in the protest.

On August 17, 2019, a group of students who were admitted to the 2018 notary examinations, gathered in front of the building of the Iranian Organization for Registration of Deeds and Estates in protest against the order to suspend the interview processes and recruiting the admitted students. The protesters stated that our job prospects, which we had prepared ourselves for months to take the examinations, have been destroyed by this vote. (The state-run ILNA News Agency – August 17, 2019)

In another protest, a group of people from the village of Temeliyeh in Firuzabad District, gathered on August 17, 2019, in front of the Division’s Office to protest against the suspension of the watershed management operation. The Head of Firuzabad District confessed the allocated amount for the project for Temeliyeh was more than 2 billion riyals (approx. 600,000 USD), which has not been allocated. (The state-run IRNA News Agency – August 17, 2019)