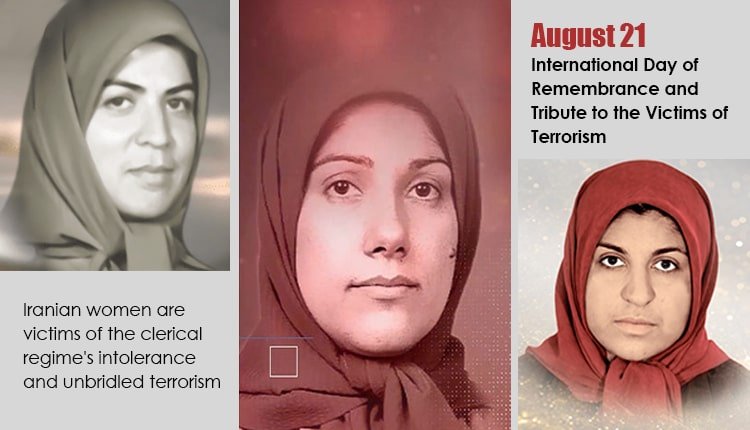 Iranian women have always borne the brunt of the clerical regime’s suppression with their flesh and bone. As for occupation, education, sports and clothing, they suffer from restrictions and deprivations far more than men. However, they enjoy “equality” in executions, arrests and torture. In every political impasse and economic crisis, women are the first group to pay the price. On the flip side of the coin, the regime’s unbridled terrorism has no mercy on female opponents.

On August 21, International Day of Remembrance and Tribute to the Victims of Terrorism, we commemorate Iranian women who became victims of the Iranian regime’s terrorism for their opposition to the regime.

Effat Haddad and Fereshteh Esfandiari were killed in this attack and Sedigheh Khodaii Sefat was seriously wounded.

On the night of February 21, 1996, Zahra Rajabi who had travelled to Turkey to attend to the situation of Iranian refugees in that country was assassinated in Istanbul by the Iranian regime’s terrorist diplomats and three other terrorists directly sent by the Intelligence Ministry in Tehran to carry out this mission according to a plan approved by the regime’s Supreme Security Council.

Iraqi mercenaries of the Iranian regime infiltrated into Camp Ashraf on September 1, 2013, bent on slaughtering more than 100 PMOI members based there. They killed 52 of them including six women and abducted 7, including another six women. No information has been available on the fate of the hostages to date.

The history of the Iranian regime shows that four decades of appeasement by the West has enabled and emboldened the mullahs to commit countless crimes with impunity. The time has come for major powers to give up their appeasement of the first state-sponsor and the central banker of terrorism and the world’s top record holder of executions, and stop giving it concessions.