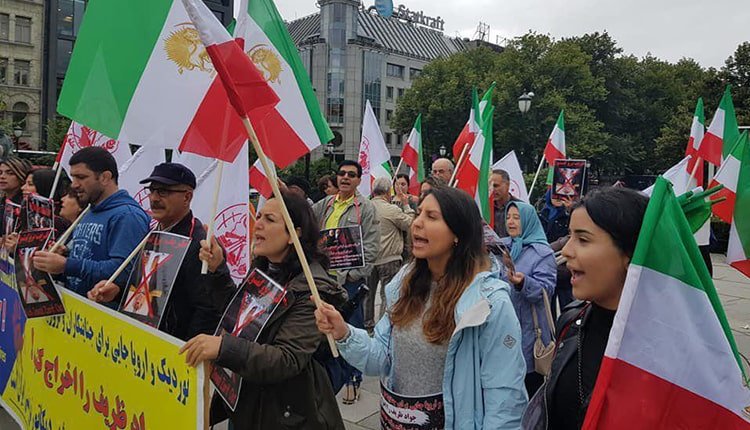 Supporters of the Iranian Resistance in Norway held a stormy protest against the visit to Oslo by the Iranian regime’s Foreign Minsiter, Javad Zarif. Iranian women played a key role in these protests.

Thursday, August 22, 2019, simultaneous with Javad Zarif’s visit to Norway’s capital, freedom-loving Iranians and supporters of the Iranian Resistance held vehement protests against this visit. They denounced Norway for accepting the representative of the world’s top state-sponsor of terrorism.

Iranian protesters hurled rotten eggs and tomatoes towards Zarif’s delegation. Iranian women played a key role in this act of protest, and in other protests in front of the Foreign Ministry and the Parliament. The cries of Iranian women had filled the air outside the Grand Hotel where Javad Zarif was holding a meeting. A number of Iranian protesters were arrested during this act of protest.

Protesting Iranians including a large number of women urged Norway to sever ties with the Iranian regime, pressure the mullahs to free political prisoners, and support people’s protests in Iran.

Norway’s national television, NRK, reported the “egg attack” on the Iranian regime’s delegation, and broadcast scenes of the protests by active Iranian women and supporters outside the Störtinget and the building where Zarif met the Foreign Minister of Norway.

The NRK reported on August 22, “Exiled Iranians held a demonstration today against the visit by the Iranian Foreign Minister Javad Zarif to Oslo. The protesters say repression in Iran has become worse than ever and the government of Norway should not have accepted Zarif.”

The NRK TV added, “This evening outside the Grand Hotel, eggs were hurled at the Iranian Foreign Minister. Police intervened and arrested at least seven. Iranian exiles are dissatisfied that Norway has accepted the representative of the Iranian regime.”

It is common knowledge that Zarif and his ministry’s mission is to defend and whitewash the mullahs’ crimes, and to coordinate and facilitate terrorist plots abroad. Just in 2018, five of the regime’s diplomat-terrorists, including an ambassador, were expelled from Europe for their direct role in terrorist conspiracies against the Iranian Resistance and dissidents. Another four operatives, including a so-called diplomat, are in prison and awaiting trial in Brussels for plotting to bomb the Free Iran grand gathering in Paris in 2018.

Maria Candida Almeida: You have shown women’s strength in leadership