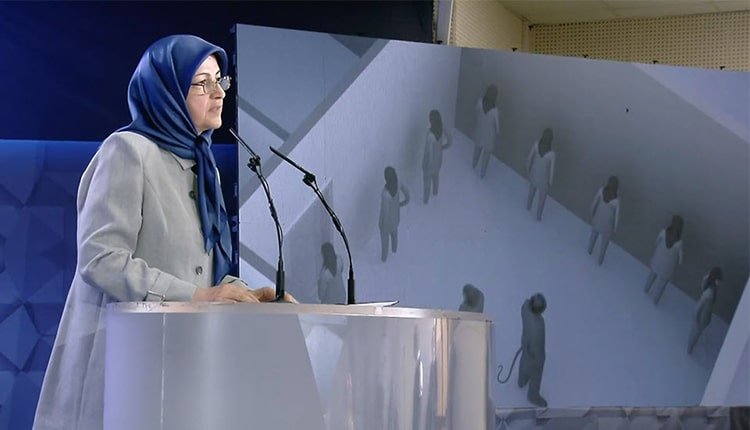 My name is Homa Jaberi. I was detained in the mullahs’ prisons for five and a half years. I wrote a book about the crimes I witnessed in prison and I will explain parts of it summarily today.

On June 20, 1981, when I was 18 only, I got arrested in the 500,000-strong demonstration held by the Mojahedin in Tehran. I was taken to Evin Prison. I spent two years in Gohardasht and Evin prisons. As the misogynistic regime which is in particular against Mojahedin women was not able to break us through torture, it set up a compound called the “Residential Unit.” This was a secret compound for torture in Ghezel Hesar Prison.

Families did not know that their children were being held in this secret torture chamber and were looking for them in other provinces.

Only the criminal Lajevardi (infamous as the butcher of Evin) and other torturers like him were allowed to enter the Residential Unit.

Some of my friends and I were picked to be transferred to this place. From the moment we were put into the vehicle, several torturers began beating and whipping us.

Blindfolded, we were punched and kicked continuously until we reached the destination. They shoved us out of the car. We kept falling around and were unable to stand on our feet. Then, they threw us into a room where they placed thick hoods over our blindfolds. They told us, “We’re going to kill you tonight!”

Then they started kicking us around like a football. I suddenly received a strong blow to my heart which made me scream and fall down. But we were not allowed to scream, and anyone who did so, would be tortured even worse.

This lasted until midnight. My face was totally smashed and I couldn’t move my arms due to vicious lashing.  Then, Lajevardi walked in and said, “This is our bottom line with you. This is going to be your Hell and no one is going to help you. You can scream as much as you want, no one will hear you and you will all die here.”

They kept us standing face against the wall for three days without any rest. We became delirious, had lost our balance, and kept falling on the floor. On the third day, I went unconscious.

The situation in the Residential Unit was that the torturers were always with us in the same room and all night long. We were blindfolded and facing the wall, all the time. I was there for 40 days, but some of my friends were kept there for six months, or even more than a year. There was absolute silence; no one was allowed to make any noise. We got severely tortured for coughing or sneezing. We were not even allowed to scream under torture. If anyone screamed or cried out, the torture would get worse.

Every command was accompanied by beating and lashes. The torturer used a heavy thick cable to whip. If he hit once, it meant that we could sleep for an hour after a few days.

A group of torturers attacked us several times a day while playing mourning songs. Even while we were eating or praying, they would kick us into the wall or kick us in the side so we would throw up our food.

There was zero hygiene there. During the 40 days I was there, I didn’t take shower or brush my teeth. Even, the toilets were clogged and we had to step into sewage water to use the toilet.

After 40 days, I was transferred back to Evin Prison. In Evin, I saw my friends who had been detained in the Residential Unit for more than a year. They had completely lost their sanity because of the inhumane conditions there. They were unable to explain what had happened to them. Only a handful of them who were a little better said they had treated them like animals. The torturers had forced them, under sever torture, to make animal sounds. They were forced to crawl on their hands and feet like animals while the torturers rode on them. And some had been raped.

Another form of torture at the Residential Unit was psychological. For example, we had to curse ourselves in writing. We had to write swear words against us hundreds of times. Or we had to verbally swear at ourselves.

Farangis Mohammad Rahimi, Shekar Mohammadzadeh, Ashraf Fadaii, and Tahmineh Sotoudeh were among those in the Residential Unit who lost their sanity and were executed in the 1988 massacre.

If I were to say what helped me overcome the tough conditions of the Residential Unit, I must say it was my trust in our leader, Massoud Rajavi, and my faith in the cause of freedom.