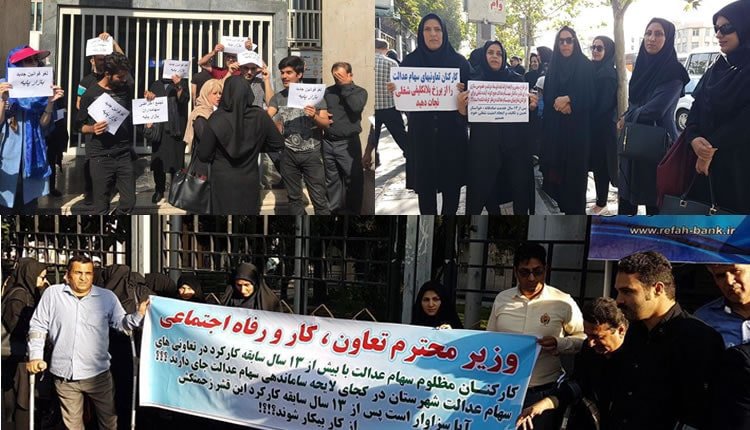 Two days of protests in various parts of Tehran on September 2 and 3, 2019, saw active participation of women.

A group of wage-earning teachers hired by the Department of Education on temporary contracts gathered outside the clerical regime’s parliament in Tehran, on Tuesday, September 3, 2019, to protest their undetermined status of employment. Women actively participated in this protest. The wage-earning teachers a large number of whom are women, held placards in their hands.

Gholam Hossein Sakhaii, deputy for research, planning and human resources of the General Department of Education in Isfahan, admitted that they had recruited some 5,000 retired teachers and that the retired wage-earning teachers had not been paid since last December and the working wage-earning teachers had not received their pay since November. Sakhaii said if the wages of these teachers are not paid, the Department of Education in Isfahan would face serious difficulties. (The official IRNA news agency – September 3, 2019)

A number of employees working at the offices of the Saham-Edalat Company gathered in protest on Tuesday, September 3, 2019, outside the Ministry of Labor and Social Welfare in Tehran. They, too, are protesting undetermined status of their employment and demand to receive their unpaid salaries.

On Monday, September 2, 2019, residents of Samen-ol A’emeh Township of Ferdowsieh, rallied outside the Governorate of Shahriar to protest lack of hygiene in this township. One of the residents said, “There are a lot of problems in this township. It’s been three to four years that we have sewage problem… but nobody accounts for it.”

Another resident said, “Our children are playing in black water. Those dogs that are going around the township, the dogs are contaminated. Don’t we have children? Don’t they have children?”

Also on Monday, September 2, 2019, clients swindled by the IRGC-backed Caspian financial Institute rallied in protest outside the Judiciary building, demanding their deposits.

Women participated actively in all of these two days of protests in Tehran.

Common practice of early marriages in Iran is cause of concern