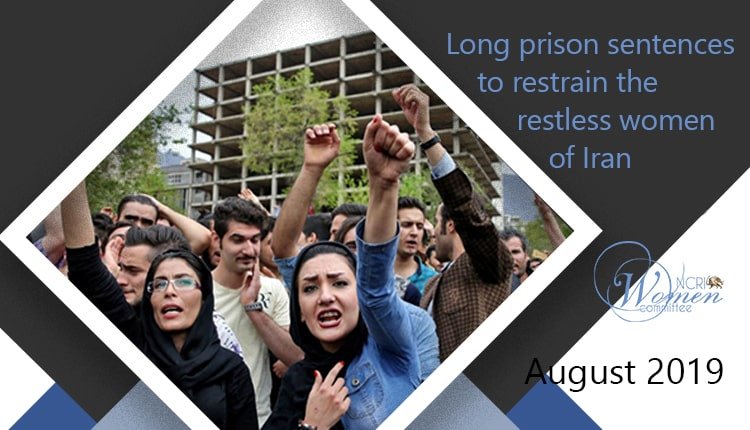 Long prison sentences to restrain the restless women of Iran

Recent months have seen ramped up repression in Iran and escalating aggressions in international waters by the clerical regime.

Since any change in the behavior of the ruling mullahs will end up toppling them, the regime has massively clamped down on the Iranian public to contain their widespread discontent and curb their upheavals against a corrupt regime which has destroyed the country’s industry, economy and environment, leaving the majority of the populace with empty pockets and baskets under the poverty line, while the regime’s officials are stealing exorbitant sums of money, every day, and disappearing one after the other.

Women have always borne the brunt of oppression in Iran. So, August marked the flogging of a prisoner of conscience before being released, 5 to 24-year sentences for participation in simple acts of protests, escalation of physical and psychological pressure in various prisons, a new wave of arrests of female activists, and unfortunately, the execution of another destitute woman.

The Paris-based Reporters Without Borders (RSF) expressed alarm that a new wave of arrests and interrogations of female journalists had started in Iran since the beginning of August.

The limited pages of this monthly report provide a brief glance over the news regarding the women of Iran in August 2019.

A 38-year-old woman, mother of two, was hanged in the Central Prison of Mashhad on August 25, 2019. She had committed murder due to poverty. Not identified by name, she was the 94th woman executed during Rouhani’s terms in office. The Iranian regime executed at least four women in July.

On the other hand, Elham Ahmadi, a Sufi woman from the Gonabadi Dervishes in Iran, was released from Evin Prison on August 13, 2019, but received 74 lashes before her departure, according to former political prisoner Golrokh Iraee.