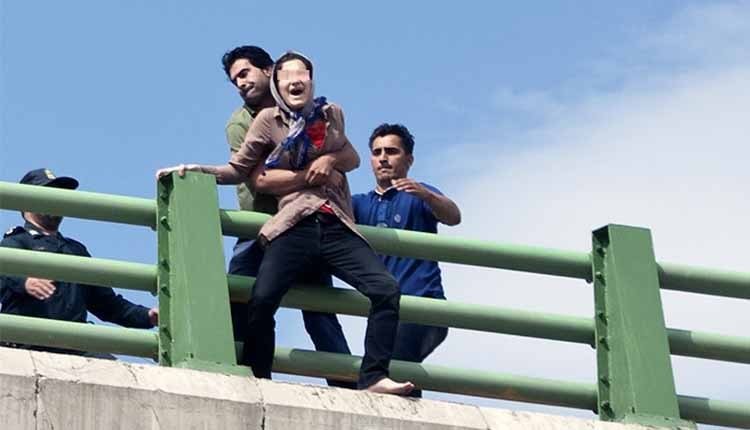 World Suicide Prevention Day (WSPD) is an awareness day observed on September 10 every year, in order to provide worldwide commitment and action to prevent suicides. Under the clerical regime, suicides have been on the rise and Iran stands as the first record holder in the Middle East with regards to suicides among women. Not only they have taken no action to prevent suicides among women but the regime’s misogynistic policies and laws have been further fomenter of this social ill.

Increasing pressure and restrictions imposed on Iranian women in addition to various obstacles to their employment and social activities, the marriage laws and widespread poverty, are some of the main causes of growing depression and despair among women in Iran, leading to a growing rate of suicides among women.

Iranian women have no form of support in the face of misogyny institutionalized in Iranian laws and policies. Instead of removing the structural and discriminatory obstacles and providing equal economic opportunities for women, the Iranian regime is reinforcing its laws and regulations which discriminate against and marginalize women. The Iranian regime’s laws see women as slaves at the disposal of men, and therefore, women ultimately resort to suicide to avoid further pressure in family disputes.

According to a social pathologist, the rate of suicides among women in Iran increased by 66 percent during a five-year period. (The state-run Khabar Online – November 3, 2017)

Mohammad Mehdi Tondgouyan, deputy youths’ affairs in the Ministry of Sports and Youths, for the first time revealed the figures on suicide in Iran on August 19, 2018. He said 4,992 persons had committed suicide in Iran from March 2017 to March 2018, adding, “Two-thirds of those inclined to commit suicide are women and one-third are men.”

Tondgooyan added that the Greater Tehran Province had the highest rate of suicide in the country.  He said that on the average, most suicides occur in the age ranges of 25-34, and 35 and above, but that under-17 suicides have been occurring for several years. “According to the latest figures, 212 youngsters under the age of 17 committed suicide.” (The state-run ILNA news agency – August 19, 2018)

Noting that the average international suicide rate is 8 per 100,000 persons, Saeed Madani, a social researcher and criminologist, said, “In some Iranian cities the average is much higher. For example, in Masjid Soleiman, the average suicide rate stands at 27.2 and in Kermanshah, at 26.2.” (The official IRNA news agency – January 21,2018)

On numerous occasions, the regime’s officials and experts have acknowledged that suicides are not fully reported and announced in Iran, and that the figures announced by the Coroner’s Office and other government agencies must be considered as minimum.

Poverty among main contributors to suicides among women in Iran

The number of women and girls who committed suicide due to poverty increased last year. A few shocking examples follow. The large number of young mothers and pregnant women among victims is a new phenomenon caused by the immense pressure endured by poor and low-income families in Iran. The devastating flashfloods last spring which hit many Iranian provinces only added to the extent of problems impoverished families face.

A mother and her 11-year-old daughter ended their lives by consuming aluminum phosphide on Friday, August 2, 2019, in Neyriz, Fars Province. The next day, the father of the family also killed himself in a deliberate accident with a semi-trailer truck.

Five days earlier, Iranian official media had reported another family suicide in Yazd. Four members of a family committed suicide on Sunday, July 28, 2019. The mother of this family ended her life with high dose of insulin injections. Her three children also committed suicide by consuming aluminum phosphide, after informing the emergency, two of whom died. (The state-run Fararu website – July 28, 2019)

A female municipality worker in Arak attempted self-immolation in protest over large deductions from salaries of employees. Her colleagues prevented her from doing so, but she was fired by the municipality of Arak. (The state-run ROKNA news agency – July 19, 2019)

Elaheh Amiri, the mother of a two-year-old, hanged herself on August 2, 2019, in a village in Saqqez.

A 34-year-old mother hugged her 6-year-old son and jumped from the fourth floor of a building in Tehran’s Mehrabad district, ending their lives, the state-run ROKNA news agency reported on May 22, 2019.

Sarpol-e Zahab and Salas-e Babajani were both among the cities devastated by earthquake in November 2017 where people are still homeless and live in poverty.

Fereshteh Kahrarian, 30 and six-month pregnant, doused herself, husband and little child with kerosene and set themselves on fire on March 6 due to poverty. She subsequently died in hospital due to serious burns.

Zahra Rahmati killed herself and her two young sons, 3 and 6, due to extreme poverty in a village in Kermanshah on February 10.

Presently, more than 80 per cent of the people of Iran live under the poverty line and the middle class has diminished altogether. The percentage of people living under the absolute poverty line has increased from 12% in 2017 to 50% and the poverty line stands at 6.5 million tomans. This is while Iran sits on a sea of oil, is the world’s second largest source of natural gas, and has many natural resources.

Forced marriage is another main reason inciting suicide in the absence of any form of legal support for young women. According to the laws under the clerical regime, the legal age of marriage for girls is 13. Nevertheless, fathers are allowed to wed their daughters under this age, after obtaining the consent of a judge.

A 16-year-old young woman by the name of Ziba set herself on fire to evade her stepmother’s insistence that she marries an old man. The state-run Khorasan daily reported on August 26, 2019, that many parts of Ziba’s face and body were burnt.

On June 5, 2019, in Baneh (western Iran), Souma Khedri, 19, ended her own life because of being compelled into forcible marriage against her own will.

Delina Rahmani, 18, took her own life after being beaten by his father and the man she was being forced to marry. She shot herself on April 21, 2019.

In another shocking report from Dehloran, a married woman by the name of Mandana Hosseini, with four sons, set herself ablaze to protest her husband’s second marriage. She died after four days in a medical center in Ilam on August 19, 2019, due to the extent burns.

Based on the clerical regime’s oppressive marriage laws, men can have four wives. At the same time, they are authorized to divorce their wives without informing them.

Double pressure and restrictions on women in the family

According to Sharifi Yazdi, one of the regime’s experts, “Depression among girls is twice as much as among boys all over the world, but studies show that the number of depressed girls in Iran is four times greater… Compared to boys, girls are under heavier psychological pressure. Also, from a social standpoint, their participation, relations and cooperation are lower compared to boys.” (The state-run Salamatnews.com – July 15, 2018)

Such pressures both in society and in family relations lead to larger number of suicides among women and girls. Following are a few examples:

Four women aging between 21 and 29 took their own lives due to family problems by consuming aluminum phosphide pills. The suicides took place from June 11 to 14 in the cities of Urmia, Abdanan, Ilam and Paveh.

Golpari Amiri and Kimia Sheikhani, 19, also hanged themselves on May 31 and June 15, 2019, respectively, after having a fight with their husbands.

On May 1, 2019, in Marivan, Zohreh Kohnepoushi, doused herself with kerosene and set herself on fire. Parivash Ghanbari, 30, took poison and ended her own life in Qasr-e-Shirin on April 27, 2019, due to family disputes. On November 24, 2018, Fatemeh Ghaderi set fire to herself in Marivan and lost her life because of family disputes.

On November 26, 2018, Maryam Jangali, 37, jumped off the fourth floor and died, due to differences with her husband.

On October 21, 2018, a female student of French language at Tehran University jumped from one of the stories of a parking lot and lost her life. On the same day in Tehran, a 13-year-old girl hanged herself at home after her family left.

Suicides among women are directly correlated to discriminatory laws

In the latest example of suicides and self-immolations by women in Iran, the state-run ROKNA news agency reported that a young woman set fire to herself outside a courthouse on September 2, 2019.

The 29-year-old woman was identified as Sahar by some news outlets. She is presently in emergency care with more than 90 per cent of her body burnt severely.

The young woman, suffering from a mental disorder, had been arrested in March for attempting to enter Azadi Stadium to watch football. A judiciary official said she was charged with “insulting the public by defying the dress code for women,” and “insulting the law enforcement agents.” She set herself on fire after overhearing that she was supposed to be detained in prison for six months.

This case is one of the latest consequences of unnecessary and illegal restrictions imposed on women in Iran clearly revealing the impact of the clerical regime’s misogynist laws and policies on the growing rate of suicides among women.