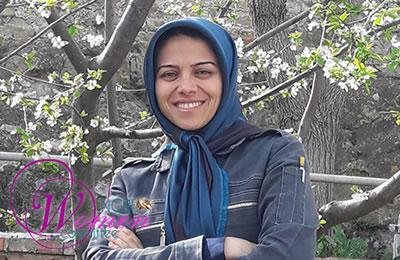 My name is Shiva Mamaghani, and I come from a family whose members are part of the Resistance; that would be my mother and father, brother, myself, and our little sister.

I grew up in a prosperous family in Iran.  Because of my father’s social status as a dentist, we were living in Tehran in one of the best conditions.  We had access to resources, good education, and many privileges.

In fact, as a young girl, I could have achieved all that I had dreamt about or wished for, and the world around me was a promising place in which I could achieve and advance as I had wanted and planned to.

I have always been eager to be a productive person and positively contribute to my community.

I strongly disapproved of the compulsory veil forced on to the women in Iran, but that did not bias me in my beliefs in Islam.  After all, we were a practicing religious family and that was something I took pride in.

After graduating from high school and passing the university entrance exam in 1999, I was admitted to Tehran’s University of Science and Industry in the field of metallurgy.

I was first introduced to the Iranian Resistance on the morning of my entrance exam when I was 17 years old.

Until then, I was oblivious to the fact that the Iran in which I was living, studying, and enjoying the company of my family, had people who were imprisoned, tortured, and executed; I was clueless of the progress of a struggle against the existing dictatorship.

I can recall that morning quite vividly; my father called upon us and in an articulate and beautiful way unravelled the society in depth and brought us to a new level of consciousness and awareness.

He began his talk with the duty of humanity and the questions which we must examine, leading to the realization of the responsibility of individuals towards their people and society.

After dad’s talk, I asked him: Well, what should we do?

And he replied, “There are some who have chosen to resist and fight as their responsibility towards this society. There is a Resistance in a place called Ashraf whose main objective is overthrowing this regime.”

A conflict arose in me, a dilemma that was the beginning of periodic questions …

So, what about all the years of schooling and my education? How about the future? What will happen to all my desires, dreams and those wonderful goals?

My father left the decision making to my own discretion, saying, “You can stay here, have your house, your car and resources, and pursue the same goals that you have been pursuing, studying and establishing your career here; But my decision is to go and join the Resistance.”

I remember on another night, at around 9 p.m., my dad was watching television when he suddenly called us all.

We rushed into his room.

The (satellite) TV was showing the scenes of a pilgrimage of Imam Hussein’s shrine in Karbala (Iraq) and the vows of the leader of the Iranian Resistance, Massoud Rajavi.

It was my first time seeing this.

It was peculiar and surprising but it instilled curiosity in me.

I was frozen for a short while. I felt that my colorful and beautiful life was no longer enticing, it had become dull. I had lost interest and no longer valued the glamorous and prosperous future life I had always envisioned.

And for the first time I began to understand the responsibility my father had told us about.

I began to feel and understand this higher goal…

And the reason to struggle and strive for great aspirations of peace and freedom, as great as a nation.

This was the decision that forever changed my life.

After that, we began moving and leaving Iran. By year 2000, we had completed all that we had to and found ourselves in the warm summer days of Ashraf alongside freedom-loving men and women.

I can basically summarize my story in just one sentence: A human being is capable of choosing their own path to a ‘true life’ and self-actualize along the way.

And the true feeling of joy, happiness, and tranquility lies here… in such a choice.