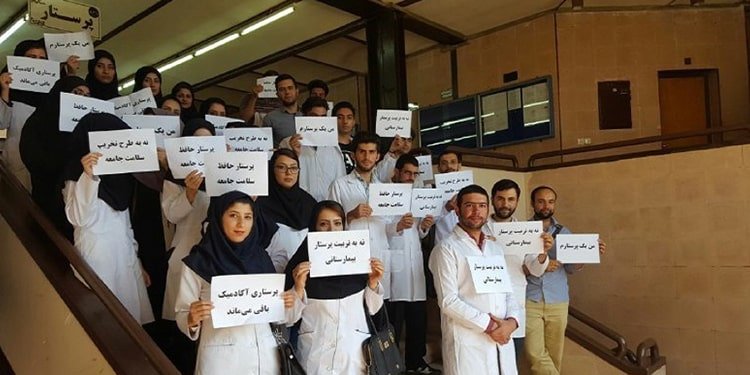 4,000 nurses leave their profession every year in Iran

At least 4,000 nurses leave this profession every year, in Iran.

He said, “At least some 4,000 nurses leave the nursing system every year, due to retirement, disability and resignation.”

Stressing on the need for budget to recruit 10,000 new nurses every year, Dalvandi added, “The National Nursing Organization has had a number of meetings in the parliament and the Ministry of Health. The nursing organization has proposed to receive a budget of 2,000 billion tomans, but unfortunately, this request has been rejected under the pretext of lack of scientific and expert evidence for budget deficit.”

Ali Asghar Dalvandi also pointed out, “Nurses make up more than half of the Health Ministry’s staff” and that they suffer due to shortage of nurses. “The hasty implementation of the Transformation Plan has been one of the problems of the nursing community.” (The state-run Mehr news agency – September 27, 2019)

Earlier in January, Dalvandi had told the press of the widespread discrimination and injustice against the nursing community in Iran, acknowledging that the situation of nurses in Iran was worse than the nurses’ situation in Kenya and Iraq.

This is while the secretary general of the Nursing House of Iran said that due to financial restrictions and the policy of not granting new licenses, there were 30,000 unemployed nurses in Iran. He added, “If we want to have the minimum number of nurses for the 80 million population (of Iran), we must have at least 240,000 nurses working across the country, whereas right now, there are only 160,000 nurses who provide medical and health services.” (The state-run ILNA news agency – January 12, 2019)

Despite the sensitivity of their job, and its inherent pressure and harms, the majority of female nurses in Iran are not permanently employed, and the majority of them work on temporary contracts.