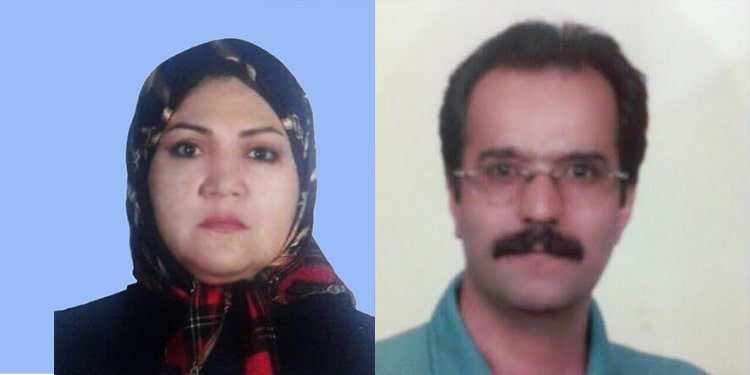 Political prisoners Fatemeh Mossanna, detained in the Women’s Ward of Evin Prison, was deprived of having a visit with her husband, Hassan Sadeqi, who is detained in Gohardasht (Rajaii Shahr) Prison in Karaj.

The visit was cancelled because Mr. Sadeqi did not accept to wear the prisoners’ garb and be transferred with shackles and handcuffs. The prison’s supervisor thus ordered cancellation of the visit, the first after several months.

Fatemeh Mossanna and her husband, Hassan Sadeqi, were arrested on April 9, 2014, during the funeral ceremony they held to commemorate Mr. Sadeqi’s father, deceased on January 29, 2014, in Camp Liberty, Iraq, where PMOI members were held under siege. The couple were sentenced to 15 years in prison for having contacts with the People’s Mojahedin Organization of Iran.

The Iranian regime’s agencies confiscated their house and their shop in March 2019.

Fatemeh Mossanna was arrested in 1981 and detained for two years when she was only 13 years old. Three of her brothers were executed that year by the clerical regime. In another development, political prisoner Fatemeh Sepehri, was transferred to Vakilabad Prison in Mashhad, on Sunday, September 29, 2019, after 50 days of detention. Ms. Sepehri informed her family that she would not be allowed to call or see them until October 11, 2019.

Fatemeh Sepehri was arrested along with 14 other civil activists including four other women, on August 11, 2019, on the sidelines of the trial of a university professor, Kamal Jaafari. Of those arrested, Hurriyeh Farajzadeh and Pouran Nazemi have been recently released on bail until their legal procedure is completed.

Yalda Firouzian, a Baha’i citizen from Semnan, who has been detained for five months since April 30, 2019, because of her faith is presently held in solitary confinement in undetermined conditions.

In another development in Baharestan county of Greater Tehran, Zahra Zare’e Seraj, convicted in a political case, was sentenced to two years in prison on September 28, 2019, by the Revision Court, and transferred to Qarchak (Shahr-e Rey) Prison in Varamin to serve her sentence.

The 36th Branch of Tehran Province’s Revision Court upheld the ruling of the preliminary court for Ms. Shahnaz Akmali, mother of Mostafa Karim Beigi, martyr of the 2009 uprising. She was sentenced to one year in prison, banned from leaving the country, deprived of political activity or membership in the social media.

Death decrees finalized for two women in Khoy and Isfahan